Our Small Companies Fund shows the benefits of active management

The Montgomery Small Companies Fund, which was launched in September 2019, recently hit a record high. Since inception to 30 June 2020 The Fund has returned 3.63 per cent,  which compares very favourably to its benchmark, the S&P/ASX Small Ordinaries Accumulation Index outperforming it by 12.11 per cent.

Relative to most asset classes – agriculture, commercial property, gold, government bonds and term deposits – shares have provided the best ungeared investment returns since the mid-1940s. And over the longer-term horizon the shares of small companies have generally done better than the shares of their larger counterparts given they offer the opportunity to focus on businesses that occupy profitable niches and have the opportunity to grow at a much faster rate.

We believe the reason for this long term out-performance is due to the fact smaller companies are often operated by dynamic founders or hand-selected successors who are focussed on building wealth for themselves (and their fellow shareholders).

The second point to understand is the power of compounding. Small differences in annual rates of return of various asset classes have a large impact of long-term results. While investing in low return asset classes, such as bank term deposits, can reduce anxiety through a reduction in volatility and shorter-term potential losses, it can have higher long-term opportunity cost in terms of lower capital accumulation.

Working together for three years, Gary and Dominic had developed an investment methodology which categorised the companies within their investment universe into four areas (more on this later). In terms of the S&P/ASX Small Companies Index, the weightings are currently: Structural Growth (33.2 per cent), Cyclicals (29.5 per cent), Resources (16.9 per cent) and Stable Compounders (20.4 per cent).

From inception (20 September 2019) to 30 June 2020, our original investors received a return of 3.63 per cent, which in the context of the global challenges has been more than satisfactory. More pleasingly though is the fact the Montgomery Small Companies Fund out-performed its benchmark, the S&P/ASX Small Ordinaries Accumulation Index, by 12.11 per cent after all fees and expenses.

Over the past year I have got to know Gary and Dominic, I have been extremely impressed with their work ethic, their disciplined approach, and their pragmatism in taking on risk when selected opportunities become available.

For example, after The Fund exited February with a 17 per cent cash weighting, this was quickly increased towards 40 per cent in the wake of testing analysis and the COVID-19 related market free-fall. Importantly, the cash weighting was aggressively cut to 21 per cent by the end of March and to 13 per cent in April – with the abundance of investment opportunities – many of which were selling at half the price they had been for only four or five weeks earlier.

A graph comparing the current weightings of the four categories in The Fund – Structural Growth, Cyclicals, Resources, Stable Compounders (and Cash) – with the make-up of the benchmark, follows. 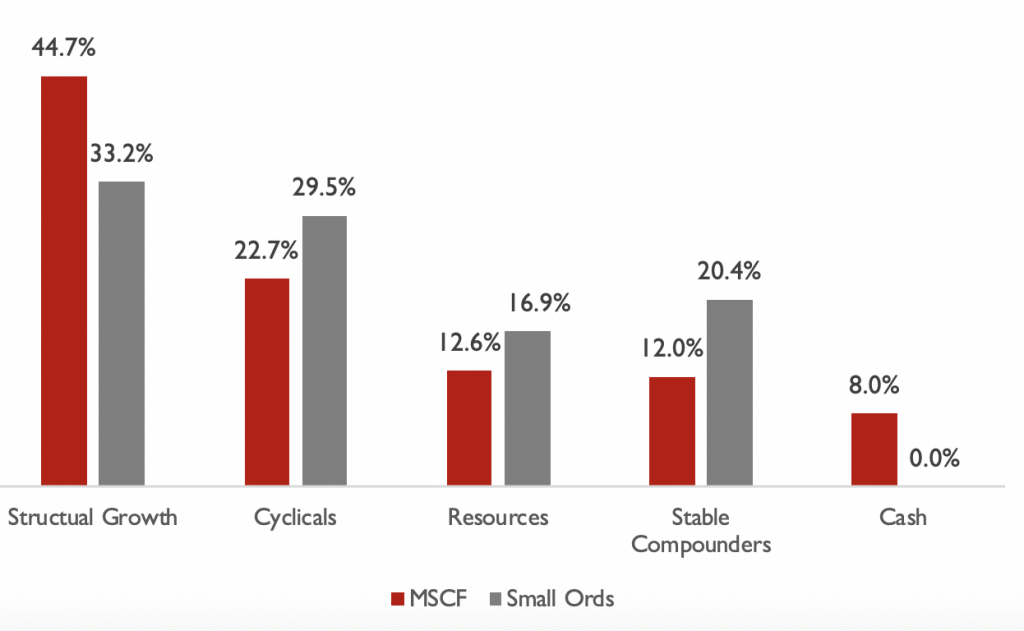 The 11.5 per cent over-weight position to the “Structural Growth” category is based on the thesis the underlying companies are expected to grow independently of the COVID-19 situation, and the broad economic cycle.  That is, they are positioned in profitable niches.

You can learn more about the Montgomery Small Companies Fund here.