Why Coles should benefit as food inflation starts to bite

Suddenly we’re all talking about inflation – particularly food inflation, which has been spurred on by the recent floods. This ‘new normal’ should play well for the value end of food retailing, where the likes of Coles, Woolworths and Aldi are likely to grow market share at the expense of pricier retailers like Metcash. Coles’ recent sales update gives a glimpse of what’s in store.

Coles reported its sales for the 13 weeks to 27 March 2022 last week. The results were slightly stronger than market expectations driven by a broadening and acceleration in the rate of food inflation in the Supermarkets division as well as the good performance from the Liquor division despite cycling strong growth in the same period last year. Management also stated that the start of the June quarter and Easter trading period has continued at roughly the same growth rate as the March quarter.

The quarter was volatile with the spread of the Omicron virus wreaking havoc on supermarket supply chains due to a combination of increased staff absenteeism and reduced stock availability from suppliers. This negatively impacted volumes during the period due to higher on-shelf out of stock levels.

While the absenteeism has improved progressively from its peak of 40-50 per cent in January, product availability has deteriorated. Coles comments that supplier fulfillment rates fell from 80 per cent at Christmas to just 67 per cent in the third quarter. Product availability was severely affected in WA due to a cut in the rail line by the SA floods. The outlook is now more encouraging than it was in February with the number of stock outs on shelf at around a third the level of the peak in February, but it is still a headwind.

March was also impacted by the floods in SA, NSW and QLD with store closures during the period as well as A$30m of stock loss, store damage and increased freight costs directly related to this weather event. At the end of the period, 13 stores remained closed (out of Coles’ total 834 supermarkets at the end of March).

Offsetting these negatives for volumes was the impact of accelerating food inflation. Prices in certain categories like meat have been rising materially from last year, but this has been offset by deflation in other categories such as fruit and vegetables. Inflation in the broader grocery aisle has been fairly benign until now. Rising input and logistics costs are forcing manufacturers to push through price increases to retailers. This is now seeing price inflation on a fairly broad basis. Coles stated that it is now seeing price inflation in almost every category. As a result, overall food inflation increased from -0.2 per cent in the December quarter of 2021 to 3.3 per cent in the March quarter of 2022. 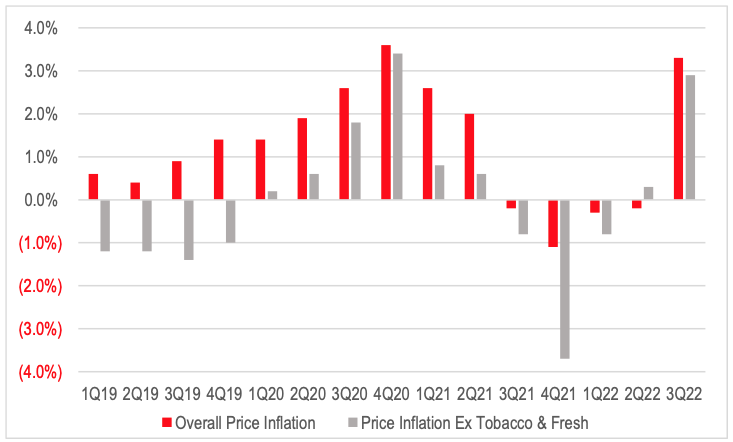 The majority of product prices have not increased in Coles as yet, and there are some products like bananas and avocados that have experienced significant price deflation in the quarter. But the inflationary pressure on suppliers is increasing not decreasing.

Deducting the price inflation from Coles’ like-for-like sales growth in each quarter gives a rough estimate of the change in volumes in each period. This shows that volume growth slowed in the March quarter but still remained positive despite the supply chain and flood disruptions. 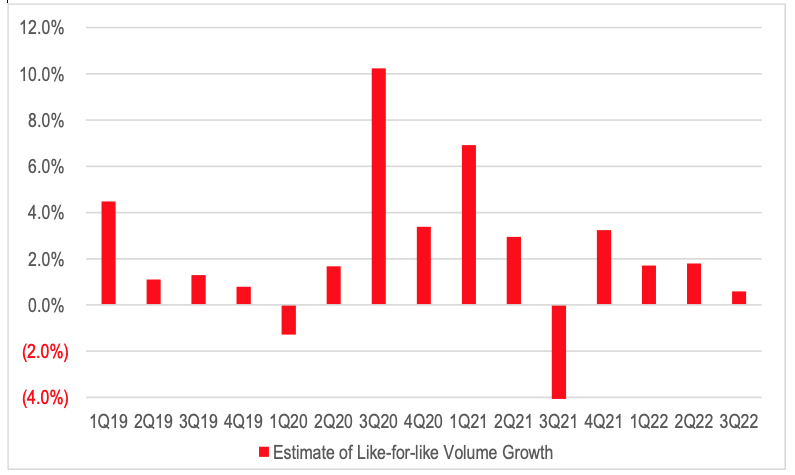 Historically, increased food inflation has tended to be beneficial to the supermarket operator earnings and margins. As noted by Coles in its post release management conference call, there are three ways product price inflation impacts the gross margin and gross profit growth:

Coles stated that in the current period there is a good proportion of price increases coming through in of these categories. Therefore, there is likely to be some dilution of gross margin percentage from the current inflationary wave. However, this will be offset by continued efficiency gains under the ‘Smarter Selling’ and strategic sourcing programmes.

While many have focused on the short-term positive for Metcash’s IGA banner group from a shift back toward local shopping by consumers in the wake of the rising infection rate, this is likely to be a temporary benefit. What is likely to be a key driver of consumer shopping patterns is increasing pressure on household budgets from accelerating food inflation. This should see consumers become increasingly more budget and price sensitive, with a shift back to fewer but larger shops.

The value chains, like Aldi and Costco, are also likely to increase their share. The biggest loser is likely to be Metcash and independent specialty stores. The major supermarkets should see some benefits, with Coles typically fairing slightly better than Woolworths in this scenario.

The Montgomery Funds owns shares in Coles and Woolworths. This article was prepared 03 May 2022 with the information we have today, and our view may change. It does not constitute formal advice or professional investment advice. If you wish to trade these companies you should seek financial advice.