Home » Investor Insights » Latest Insights » After a record year, what next for Adairs?

After a record year, what next for Adairs?

As with many other discretionary retailers, FY21 proved to be a bumper year for homewares and online furniture retailer, Adairs (ASX: ADH). The company enjoyed record sales growth and operating margins. But there are already signs that FY22 will not be as easy.

Retailers are one of the key areas of focus for the market in the current reporting season given the buoyant conditions enjoyed on the back of unprecedented fiscal stimulus and constrained spending on services, particularly in the second half of calendar 2020. The market has been cognisant of the impact of a reversion to sales for some time and the economics of enough, which had created a cloud hanging over discretionary retailer share prices even before the recent lockdowns started.

Adairs does not easily fit into either of the “COVID-19 winners” or “re-openers” categories given it received a boost from a shift in consumer spending toward home improvement and has increased its exposure to the online channel in recent years. However, it still generates a material proportion of its sales from its 69 stores around Australia. Additionally, those stores provide the company with a relatively low customer acquisition cost for its Linen Lovers club, with the members generating over 80 per cent of Adairs sales.

Given its foot in both camps, the release of its results to June and trading update for July and August was expected to produce some interesting insights.

Strong results for the six months to June

The results for the six months to June were very strong. A return to increasingly normalised shopping patterns saw in-store sales grow 34.7 per cent relative to the lockdown impacted same period in 2020. Importantly, online sales for the Adairs brand still managed to increase on the prior year, albeit by only 2 per cent, despite almost all the brand’s stores trading throughout the six month period.

Gross margins (after freight costs) remained elevated but reduced relative to the exceptional result from the first half of FY21, rising 3.7 percentage points year-on-year to 62.0 per cent. Strong sales growth and increasing gross margins delivered a 43 per cent increase in EBIT for the brand (excluding the expensed investment in the National Distribution Centre which is expected to be commissioned within the next couple of months).

The performance from the company’s recently acquired online furniture retailer in New Zealand and Australia, Mocka, showed the impact of lapping the lockdown, with sales increasing 21 per cent in the six months to June 2021 relative to the same period last year. This represents a sequential slowing in growth from the 44 per cent growth generated in the first half, and is well short of the growth rates being generated by the leading online furniture retailer Temple & Webster.

This was a little disappointing given the first half sales were impacted by constrained inventory availability which was corrected in the second half. Additionally, the company’s investment in marketing doubled in the second half, but admittedly remains low at just A$1.8 million for the 6-month period.

Compounding the lower than expected growth in sales, Mocka’s gross margins fell. This was due to increased costs associated with increasing the warehouse capacity in the business and the larger and less frequent inventory shipments.

As a result of the increased investment, Mocka’s EBIT declined slightly.

Overall EBIT before one off costs and JobKeeper payments/refunds increased 63 per cent in the second half of FY21 which was a strong result. Additionally, the balance sheet remains in a strong position with cash generation in the period resulting in the company holding net cash of A$26 million at 30 June.

The main focus for the market was the trading update for the first seven weeks of FY22. The company stated that its overall sales in that period were down 11.7 per cent on the same period last year. However, it needs to be remembered that sales were well above trend levels this time last year, having increased 28.5 per cent on the same period in 2019.

Sales for the Adairs brand fell 16.1 per cent relative to last year on the back of the broadening lockdowns on the east coast.

The company estimated that its Australian store network lost 40 per cent of its trading days during this period. Of course the same period last year was also impacted by lockdowns in Melbourne, which extended through to 28 October 2020. But trading this year has not been supported by the same degree of fiscal stimulus as last year. As a result, trading has been more impacted by the closures.

There is also the concern that there is less appetite to spend on the home after the surge in spending last year. This is more likely to show up in spending on consumer durables given that there is a longer time period between replacing televisions, fridges and other major appliances than bedding and homewares.

The online furniture retail brand Mocka continued to grow in the period, with sales rising 16.1 per cent on the same seven week period in the prior year. While there is a significant opportunity to grow the Mocka brand in Australia and New Zealand, the recent reduction in gross margins and slowing rate of sales growth raise the risk that the brand needs greater investment to realise this opportunity. This would likely require the company to sacrifice near term profitability, which could concern the market.

An important consideration is how Adairs is trading relative to other discretionary retailers given the current lockdown conditions. The table below shows the trading updates provided by other retailers so far. 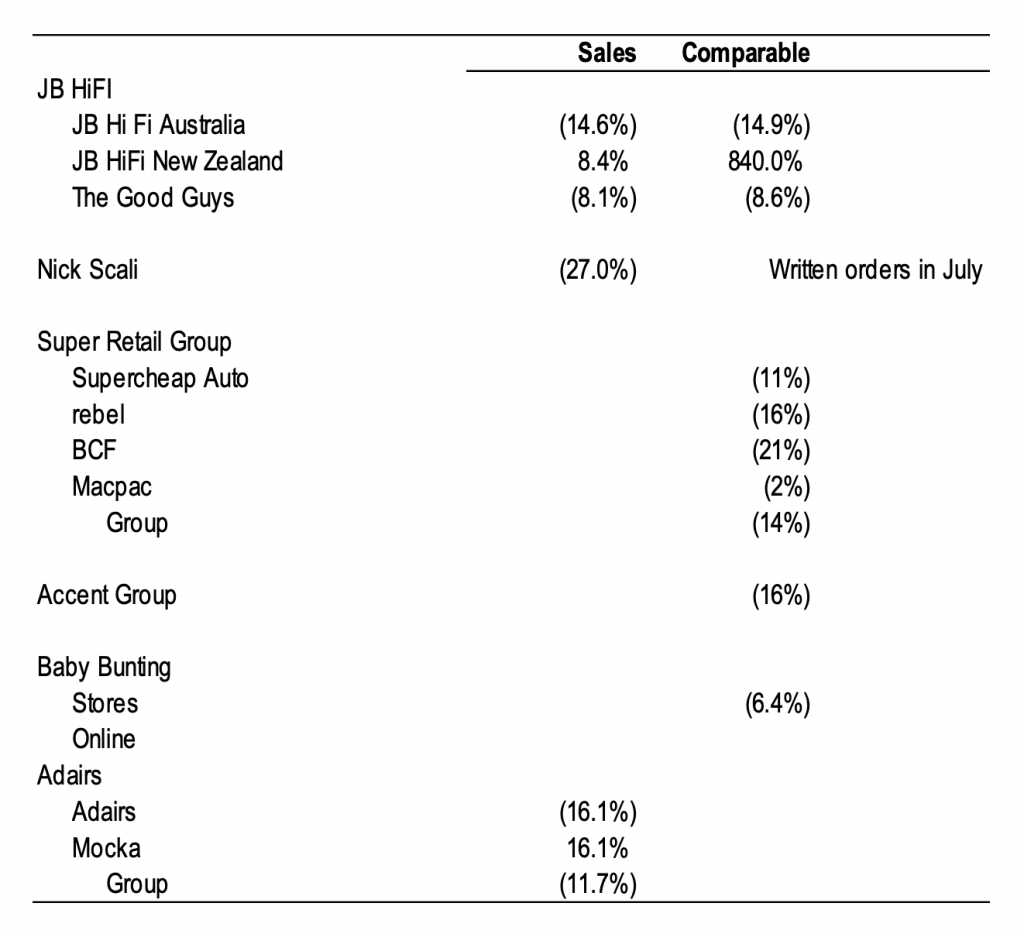 The other concern from the result was the step-up in inventory at period end. As a percentage of sales, inventory at period end was around A$13-15 million higher than the average over the last 5 years. This is largely explained by the need to hold higher level of stock given the current shortage of seaborne freight capacity, but it raises the risk of increasing aged stock levels in future given the current disruption to sales from extended lockdowns. One mitigating factor is that the stock is mainly core products like basic sheets that are not subject to changes in fashion trends.

If you are interested in hearing our views on other company results, you can join me and the Montgomery Portfolio Managers on 20 September 2021 for the Montgomery Reporting Season Review, click to register.

The Montgomery [Private] Fund and Montgomery Small Companies Fund owns shares in Adairs. This article was prepared 24 August 2021 with the information we have today, and our view may change. It does not constitute formal advice or professional investment advice. If you wish to trade Adairs you should seek financial advice.