In this video Roger addresses the question on all investors’ minds around the interaction of inflation, short term interest rates and equities. If consensus expectations of inflation and interest rates are wrong this presents a great opportunity to purchase stocks whose PEs have contracted.

It is February 2022. And over the next few minutes, I’m going to address the question that is probably on the minds of most investors at the moment, and that is the interaction between inflation, short term interest rates, and equities. And what we’d like to do is present an argument that suggests that consensus may have their expectations with respect to inflation and interest rates wrong. If that’s the case, then there is a very good argument for buying some of the beaten up stocks that have seen their PEs contract substantially over the last month or month and a half. With that in mind, it’s very important to appreciate that we are going to be mentioning some individual company names.

This isn’t a recommendation to buy those companies. In fact, we recommend only that you take personal professional advice. The last seven months or so has seen a substantial step change in interest rate expectations as a consequence of the appearance of inflation in the United States and around the world. You can see on this particular chart going back all the way to July last year 2021, that green dash line is a representation of where interest rates were expected to be back then. And you can see that since then moving to the blue line, not only have our interest rates expected to be higher, but they’re expected to move sooner and more steeply. 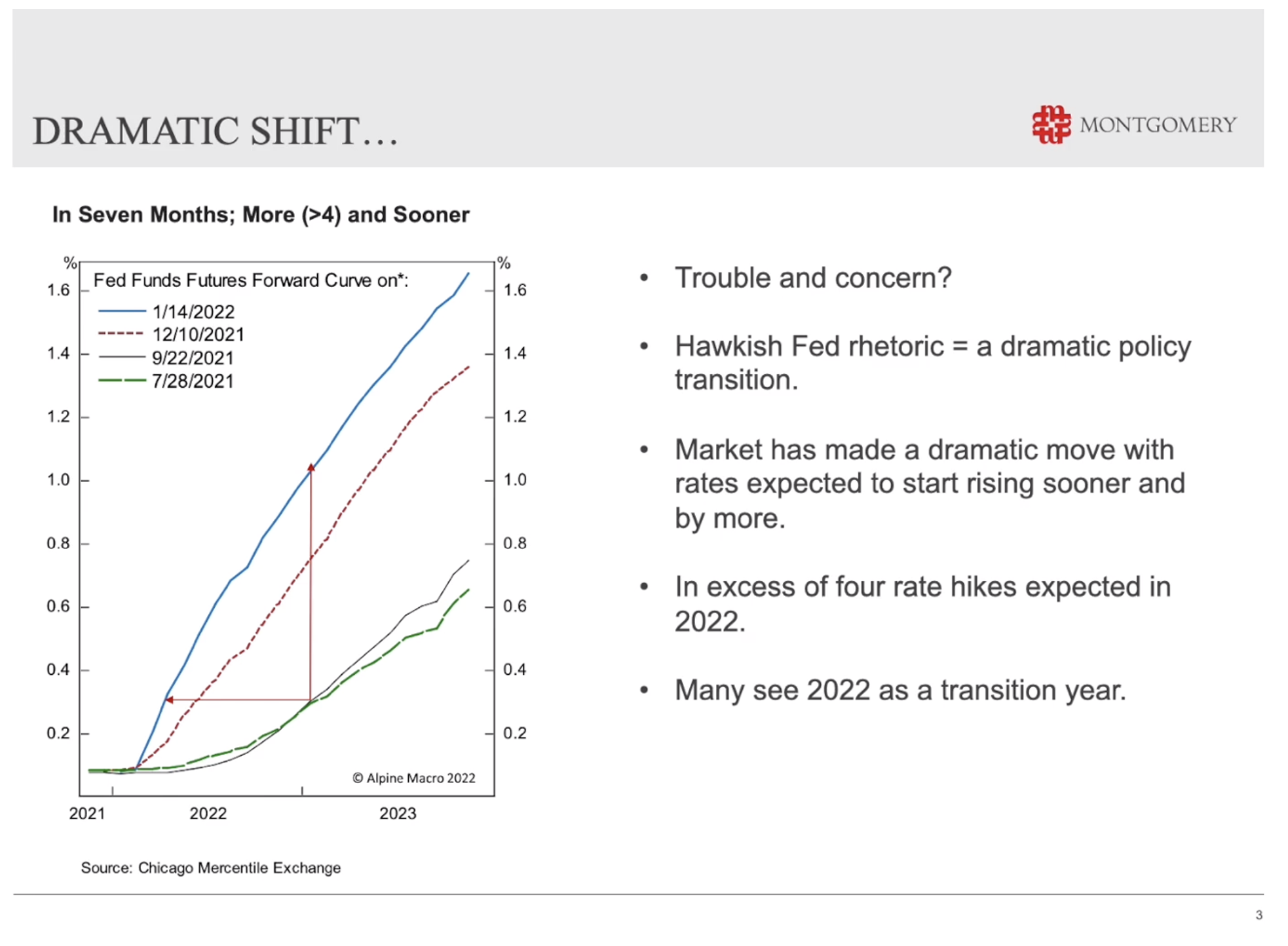 And that really has been a very dramatic change in expectations in the market. It stems from the very hawkish fed rhetoric that’s coming out of both the FOMC, the Federal Open Market Committee meeting and Jerome Powell himself. And the question is, is this troubling and should investors be concerned at the moment? The expectation is that there are probably going to be more than four interest rate hikes this year. Many investors see 2022 as a transition year. I want you to remember that expectation of four rate hikes, or even five rate hikes this year, which is currently appears to be priced in to markets, because we’re going to assess the legitimacy of that or the opportunity that it presents in just a moment.

Now, it’s really important to understand that since the late 1970s, there’s been a huge number of studies that have shown that in periods of inflation and also during periods of rising interest rates, PEs contract or the multiple of earnings that investors are willing to pay for a company contracts. And that is the case without exception as you can see in the lower chart here, those gray shaded areas represent periods since 1980, where the 2-year yield in the United States or 2-year US Treasury yields have increased. And that coincides with periods in the top chart where PEs have contracted, and that happens without exception. So, rising interest rates means PEs contract and inflation also results in PEs contracting. 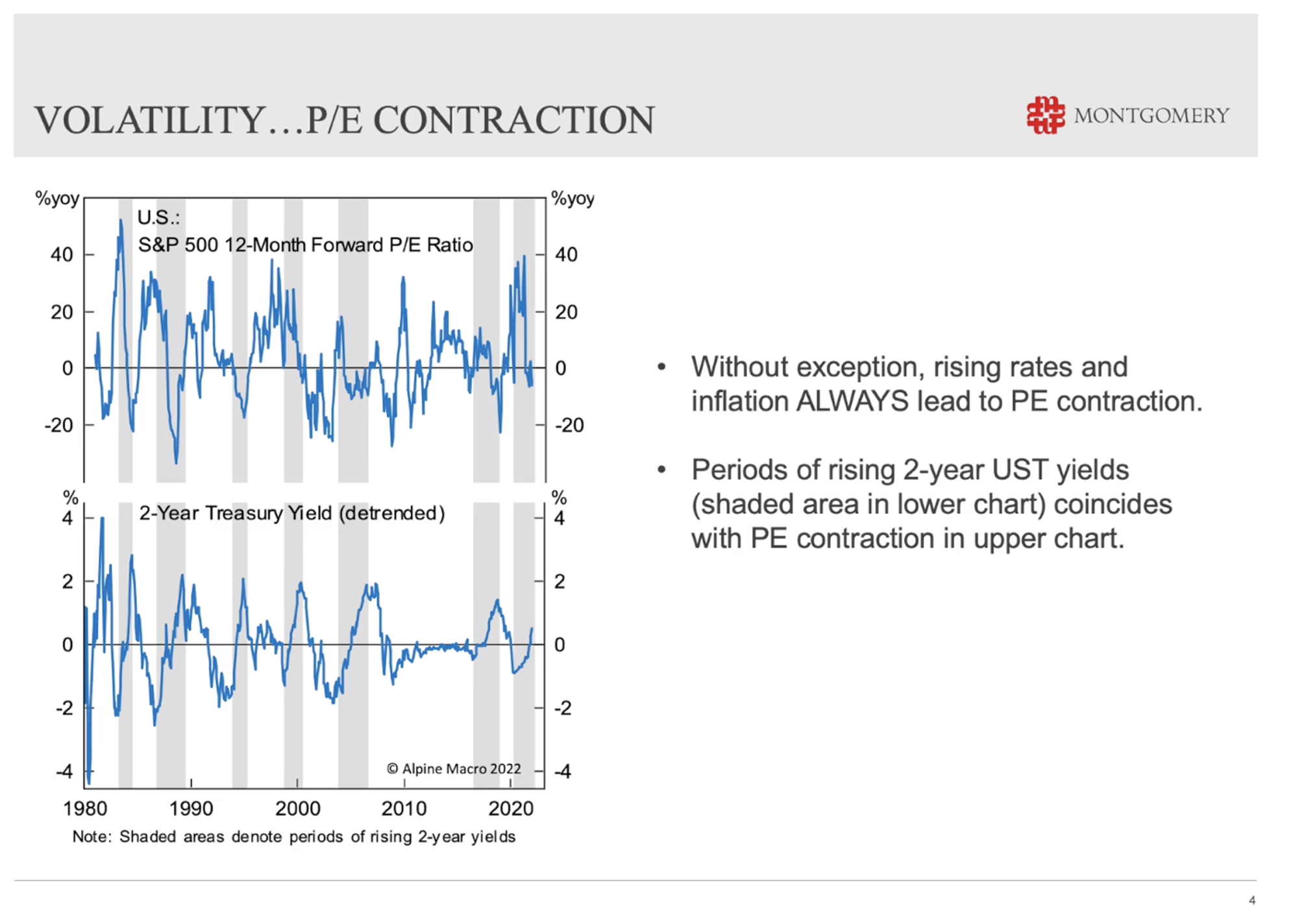 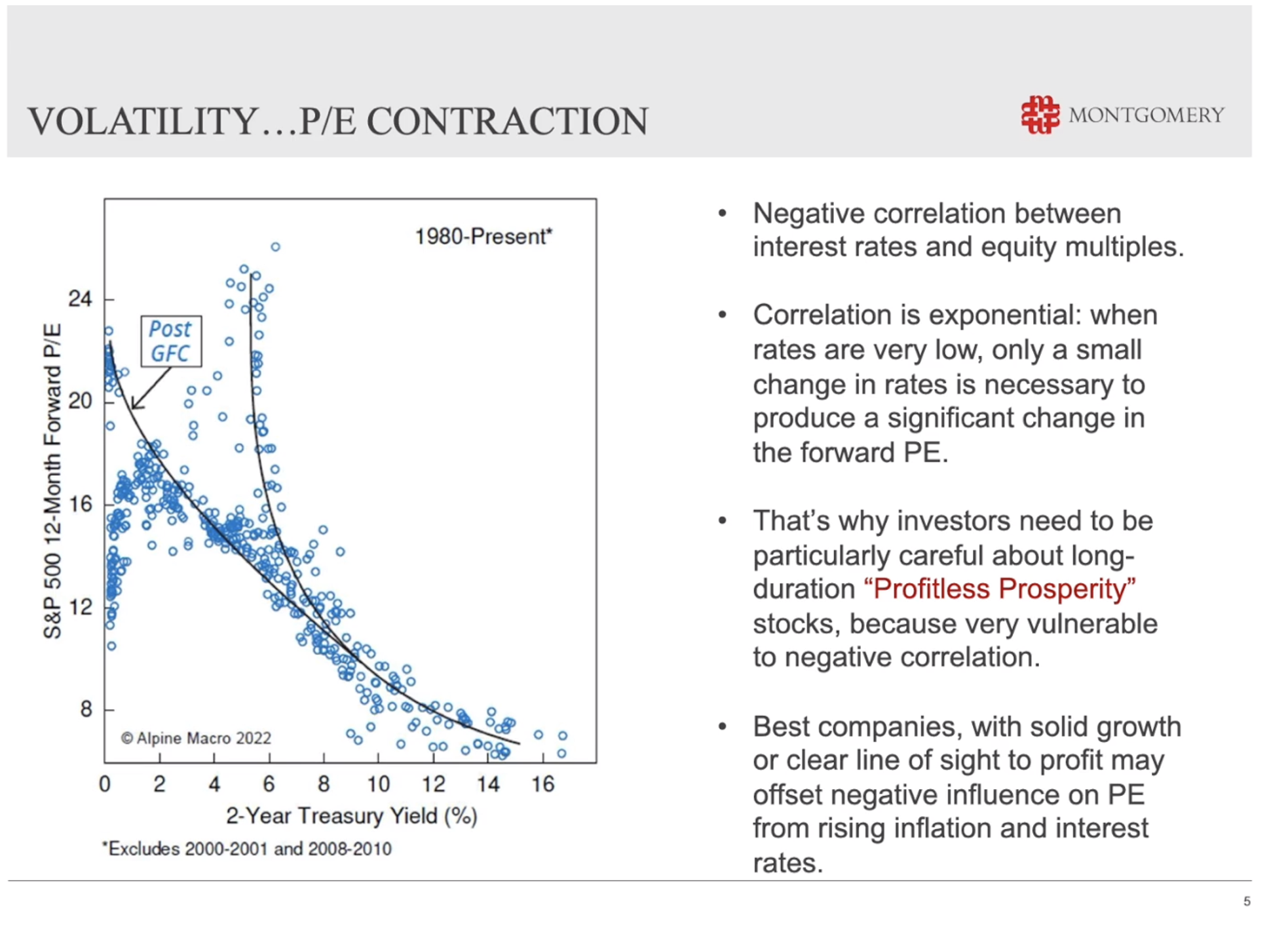 They’re the ones that tend to be most sensitive to interest rate increases or prospective interest rate increases. But of course, because they’ve contracted so much in terms of their PE, that could also be an opportunity which we’ll address in just a moment. In Australia, we’ve seen that PE contraction occur substantially. Just in the month of January, in fact, from January the fourth, you can see there are companies like Pro Medicus and Transurban and Reese, ARB, IDP Education, Corporate Travel, REA Group, for example, all very high quality companies. And they’ve seen their PEs contract from between 14 per cent and by almost a third 33 per cent, in fact, contraction in price to earnings multiples.

So, people are willing to pay substantially less for these businesses, in many cases, very high quality businesses than they were just a month or month and a half ago, but the outlook for companies is very different to what their share prices have been doing. We know that share prices are far more volatile than business operations and the changes in business prospects. And you can see this survey from GLG conducted in early 2022, survey of 471 global CEOs, and 68 per cent of those CEOs believe and are very confident or confident that their revenues will grow over the next 12 months. So, what we’ve seen is this potential setup for great opportunity for investing, because we’ve seen PEs contract amid short term fees about interest rates and inflation.

But meanwhile, the underlying companies are reporting that they’re confident or very confident in a large case of those surveyed, confident or very confident that their revenue are going to grow. So, businesses are continuing to grow. They’re continuing to profit, they’re continuing to demonstrate bright prospects, and yet their share prices have contracted substantially. So the question remains is, is this an opportunity? Well, before we answer that question, just have a look at the contraction, or think about the contraction that we’ve seen in the Fed’s assets or in their balance sheet. We know that we’ve seen quantitative easing and that’s tipping over to quantitative tapering now.

So in other words, the US Federal Reserve is buying fewer government bonds each month than what they were buying previously. And what you can see in this chart is that not only as we mentioned earlier, is there a relationship between rising interest rates and contracting PEs, but there is also a relationship between equity market returns and a contracting US Federal Reserve balance sheet. That relationship demonstrates that as the Fed contracts its balance sheet, as it goes from quantitative easing buying bonds in substantial amounts, to reducing the number of bonds that it buys, or the amount of bonds that it buys, and then to contracting its balance sheet, where it actually shrinks the balance sheet, rather than grows it at a slower rate. 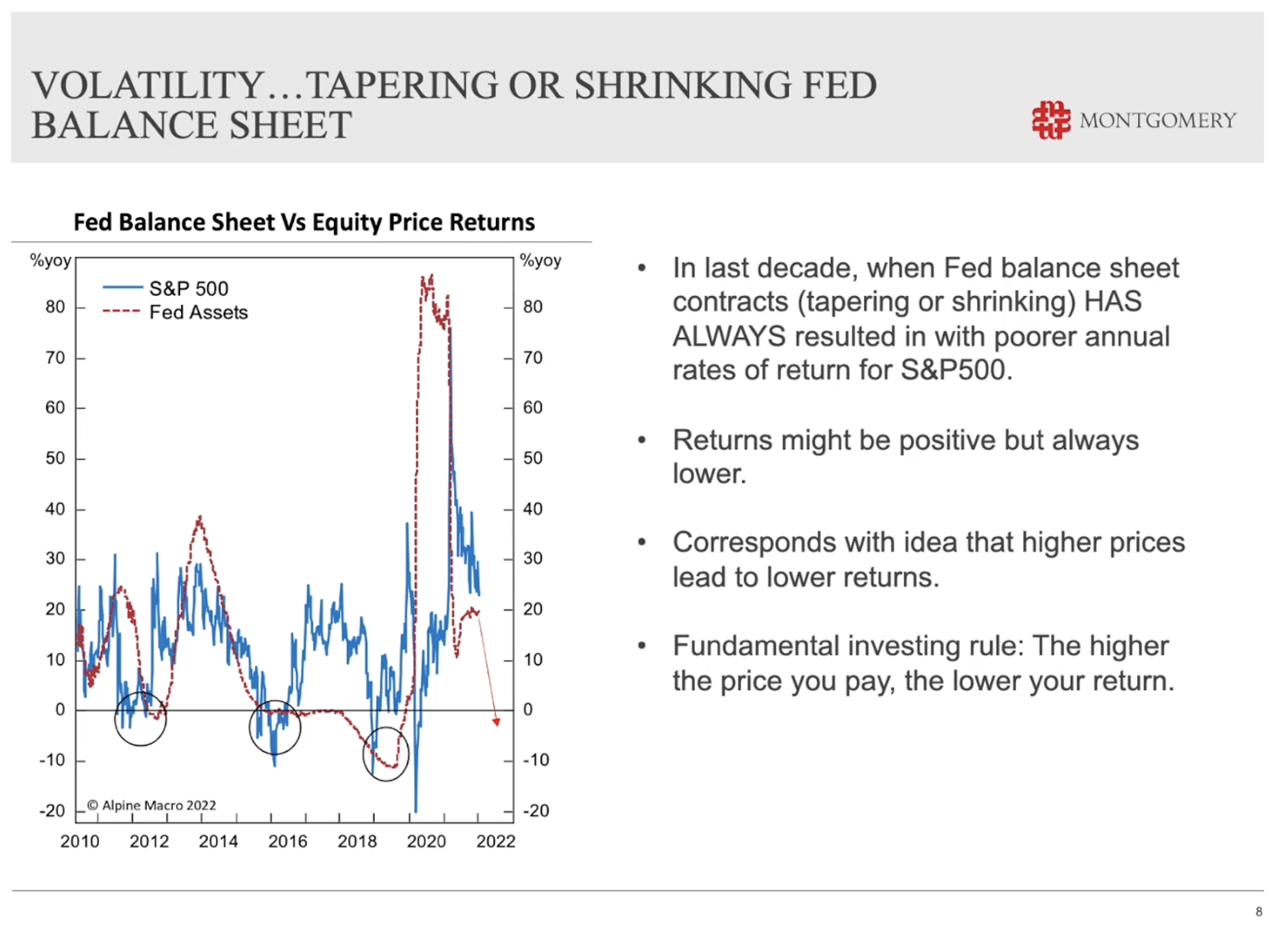 In 2018, the US Federal Reserve hiked rates four times, and they contracted the balance sheet by about 10 per cent. So, Jerome Powell’s hawkish statements recently offers a very similar prospect for 2022. Now, what we have to remember is back in 2015, we had an oil meltdown and a nominal recession in the United States. In 2016 and 2017, the economy then began recovering. The US was growing at about 3.8 per cent. We had Trump’s tax cuts, and the economy was thought strong enough to support four rate hikes. For 2018, the conditions however weren’t strong enough to support the Fed’s four interest rate increases. The Fed arguably went too hard and that produced a stock market correction late in 2018 and importantly, that saw the fed stop raising interest rates.

Now for 2018, the US S&P 500 returned minus 7 per cent, after that stock market correction. And the Fed backed off. What’s interesting is though that action of backing off raising interest rates actually saw the S&P 500 generate a 30 per cent return the following year in 2019. So, what is the possibility that the really hawkish statements we’re seeing out of the US Federal Reserve now actually coincides with peak inflation fear, or even peak inflation? Is it possible that inflation has already turned the corner, and that we see lower rates of inflation in the future, which then sees the Fed pivot its current policy or current rhetoric to a more dovish and less hawkish rhetoric? Well, here’s what the bond market thinks.

If you look at the difference between treasury constant maturity, securities, and treasury inflation index securities, which gives you an inflation break even curve, you can see that yes, expectations for inflation have risen slightly over the next 10 years, but it still remains steeply negative. That curve is steeply negative. Meaning, that inflation is seen by the bond market, at least as not persisting and in fact, temporary. I think about that in the context of what the bond market has actually had to absorb. They’ve seen 7 per cent inflation, which is massive in the United States. They’ve digested the possibility of four or five rate hikes from the US Federal Reserve.

They’ve heard tougher talk from the Fed, and there’s also political pressure to deal with inflation. And despite all of that, the bond market remains firmly convinced based on this curve that inflation is a temporary phenomena. And in fact, it’s not going to persist at all. In the US of course, inflation is on the front page and inflation has been very high there. And the reason why inflation is fastest in the US is because of course, the US offered the most stimulus. US employment cost index at the moment is rising to 4 per cent. Owner’s equivalent rent has jumped to 4 per cent. Oil’s just broken above $90 a barrel. So, there are real fears of a wage inflation spiral.

Look, there’s no question that inflation in fact is running high at the moment. You can see it on this chart for the US, and it’s running high in the US and Europe, but I wonder whether or not it could actually flame out. And in fact, there are some signs at the moment that the supply disruptions that have been partly responsible, or largely responsible for the jumping inflation are starting to ease. 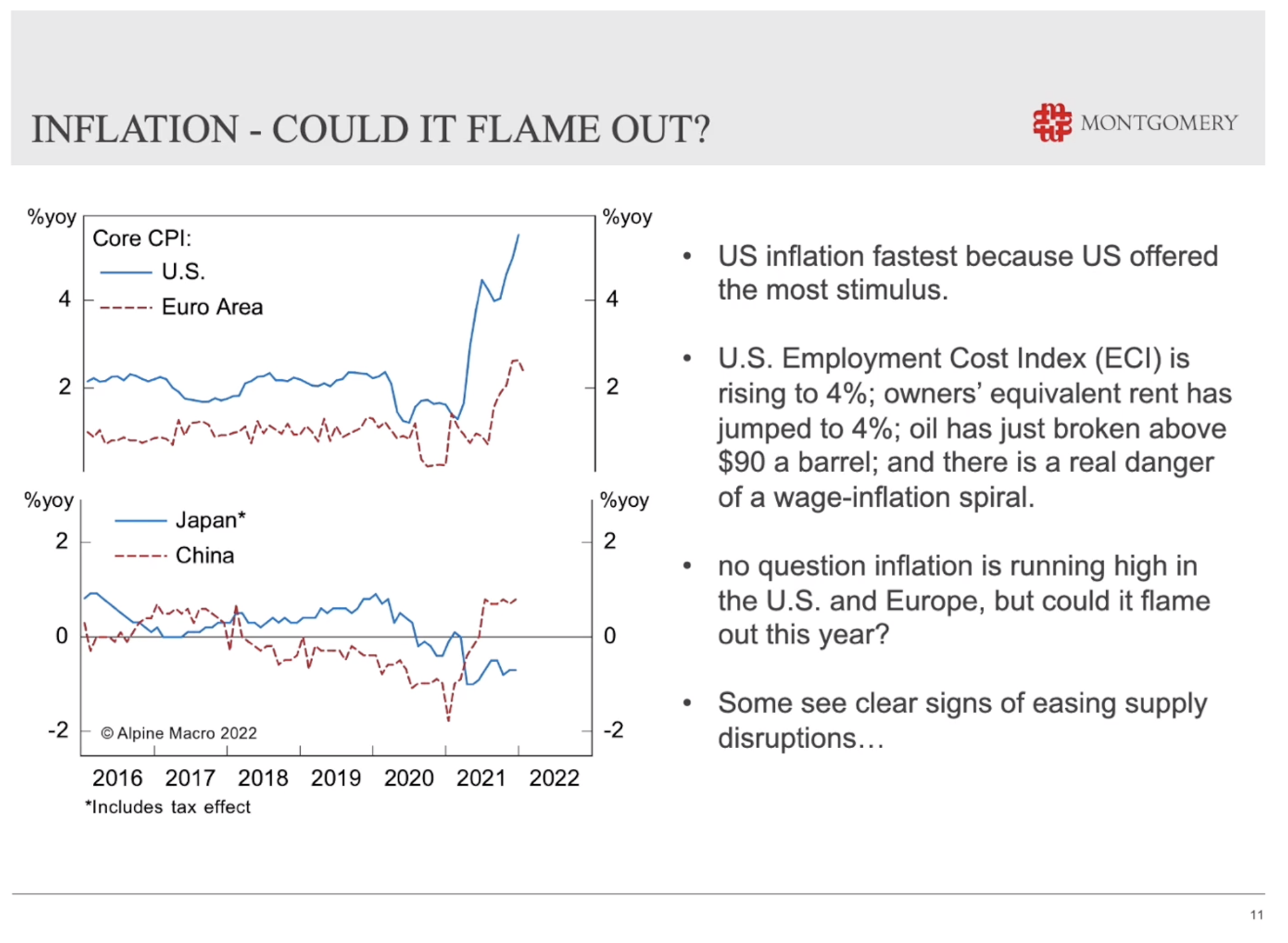 If you look at this chart here, you can see that supply deliveries and backlog of orders are actually starting to decline already. Sure, there’s still supply chain problems. They’re not going to disappear overnight. But at the margin, we’re seeing the overall strain in the supply chain start to ease as this chart demonstrates. 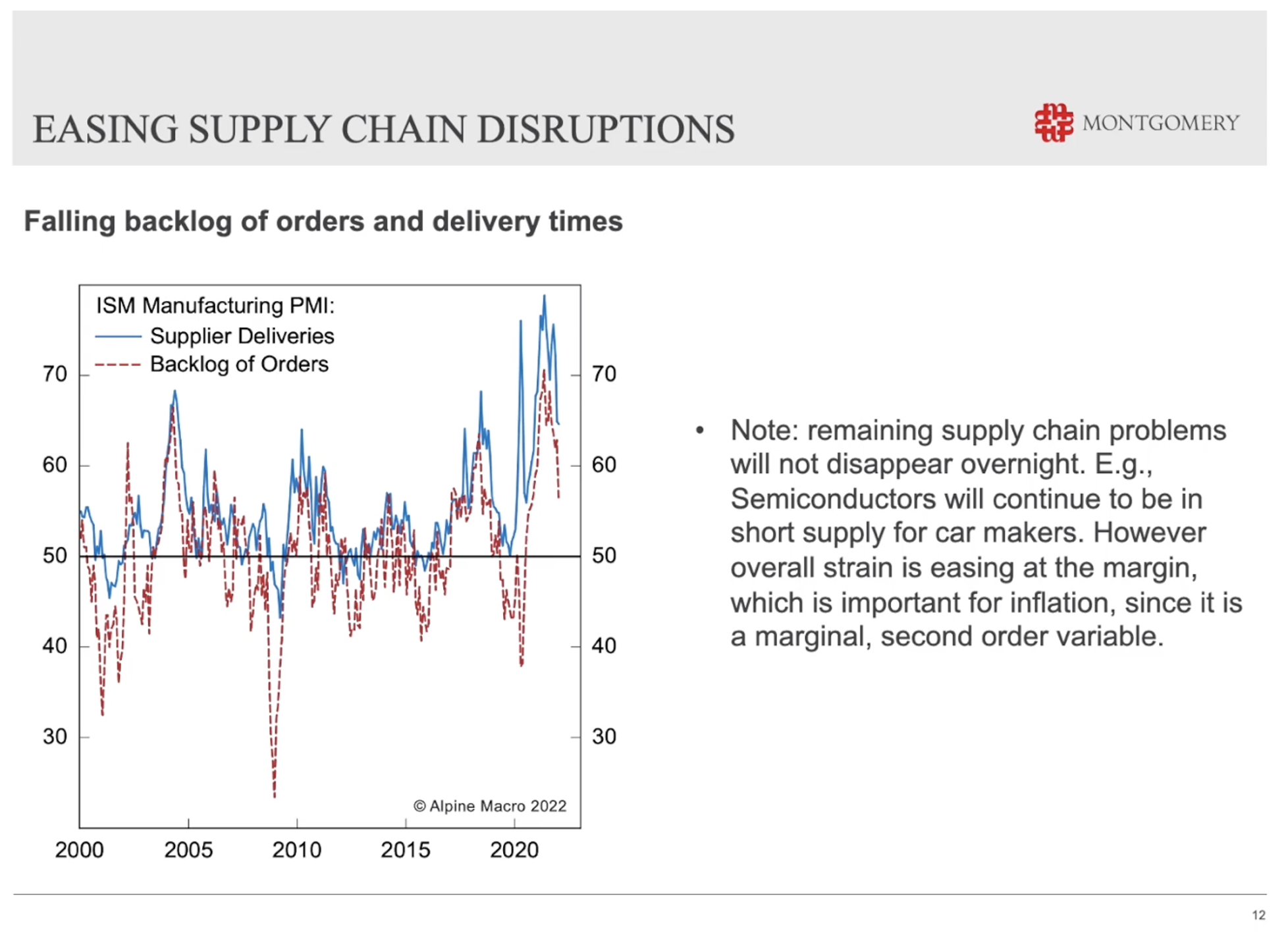 And that coincides with this chart of the ISM manufacturing prices paid index, which is already tipping over. We know that prices for container freight, dynamic random access memory, German natural gas, Chinese thermal coal prices, for all of those things are already starting to decline. So, if inflation is primarily a supply side disruption and government stimulated consumer demand, or the result of those things, then it’s quite possible these things aren’t going to continue. And of course, if we open international borders, we’ll see spending diverted to services again or travel, and that means lower demand for goods. And that we’ll see some of the price pressure on those goods start to ease. 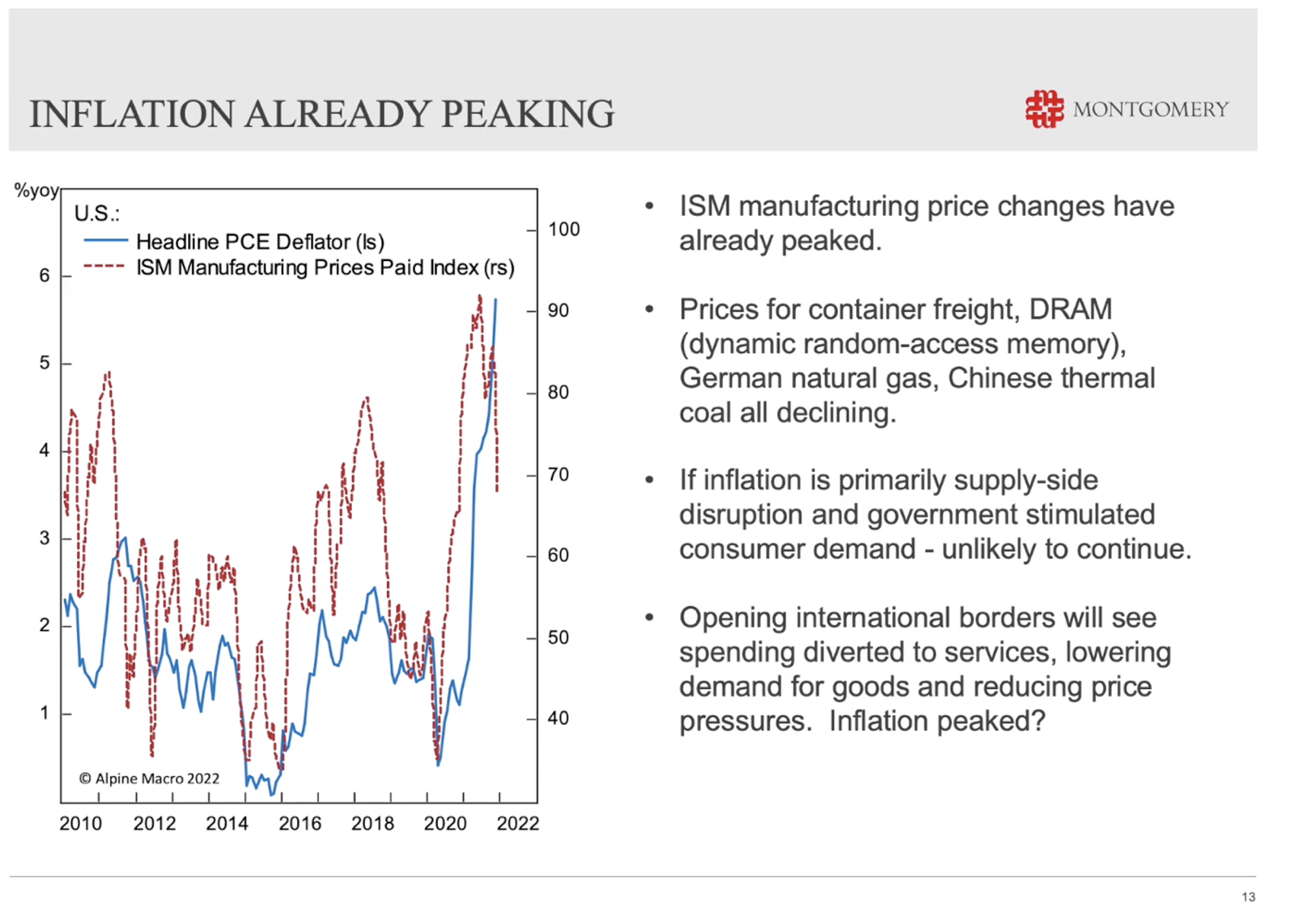 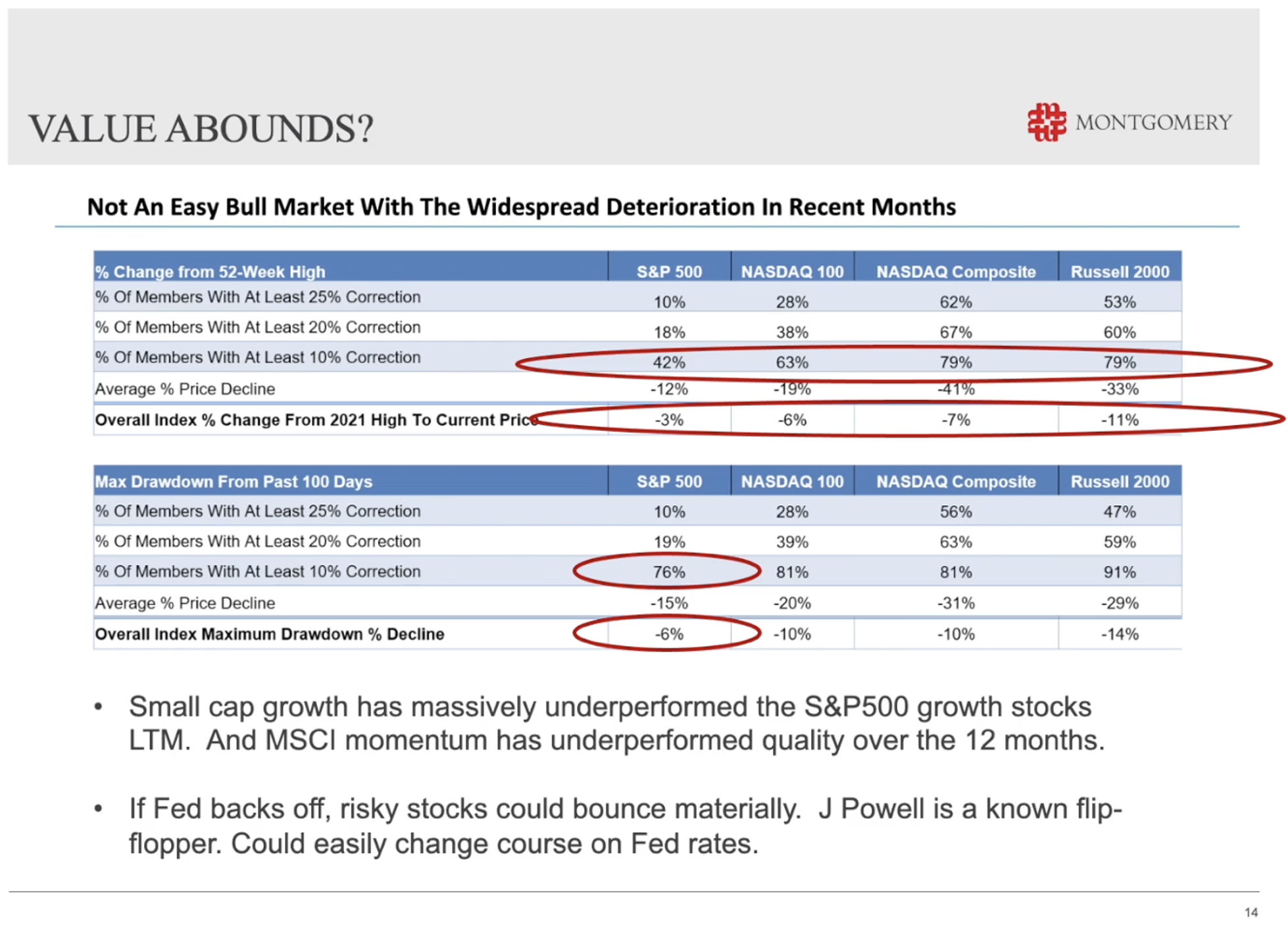 The same story is true here in Australia, and that presents a host of opportunities. If you can find businesses that are still increasing their net worth, or increasing their value by generating high rates of return on equity, growing their equity by retaining profits, that process takes years to build value, yet the stock market abandons its long term plans, investors abandon their long term assumptions for companies and worry about the short term when interest rates are expected to go up, and inflation has been running in a million miles an hour, but there is an argument as I’ve just demonstrated that inflation is already peaking, that we’ll see consecutive lower rates of inflation in the future.

And the Fed will ease its rhetoric around inflation and interest rate rises. If that happens, then the stock market could very well bounce quite violently. In fact, as violently as it’s recently fallen, and that sets up investors for a terrific opportunity for 2022. Thanks for your time, look forward to talking to you again soon.