Will Spotify be a long-term winner?

We believe Spotify (NYSE: SPOT) is an attractive investment opportunity because it commands an improving leadership position in the structurally growing, global digital audio streaming marketplace, underpinned by its expanding reservoir of proprietary consumer preference data.

Spotify is the world’s largest digital music and podcast streamlining platform. For an average of less than €5 per user per month, users can subscribe to ubiquitous access to more than 50 million music tracks and 700 thousand podcasts from any device. Today, more than 130 million users subscribe to Spotify’s service globally. In addition, another 163 million monthly active users tune into Spotify’s ad-supported “freemium” service. Near term, Spotify monetises this channel with targeted digital audio advertising. Longer term, this channel is a valuable source of premium subscriber customer acquisition, as Paid subscription users typically start out by trying the service in the freemium channel. 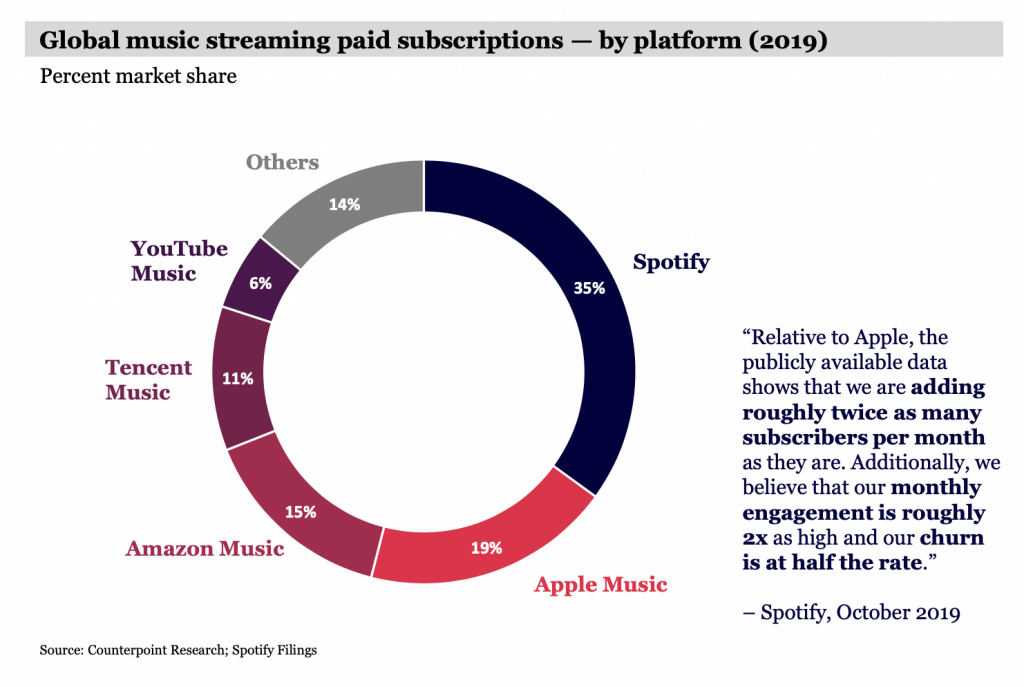 The ability of Spotify to generate data-driven insights on consumer preferences is critical to its value proposition and ongoing level of user engagement. The company estimates that it has more than five times the amount of music data than its nearest competitor. It uses this data to make listening recommendations based upon what users have liked in the past and what other similar users like. Today, around one-third of all listening on Spotify’s platform is programmed algorithmically and personalisation begins from the first day listening to Spotify’s freemium offering.

The more users listen, the more accurate the algorithm becomes for making new enjoyable recommendations, and the more users keep listening. The increased engagement drives higher retention, higher user growth, and higher revenues. Spotify is adding roughly twice as many subscribers per month as its nearest rival, Apple Music. Its monthly engagement is two times as high as Apple’s and its churn is half the rate. In this way Spotify’s scale, algorithm and data advantage drive a continuously self-reinforcing flywheel effect. Furthermore, this privileged data pool enables Spotify to drive higher value advertising for its freemium users, and greater value for record labels and their artists. These, in turn, will likely drive higher profitability for Spotify over time.

Spotify has also commenced a data-driven content strategy over recent years to accelerate user growth, engagement, and more attractive economics. Leveraging its user data on consumer listening preferences, Spotify has been quietly acquiring, or gaining exclusive licenses to, highly popular podcast content. In addition, it is investing to develop its own podcast content. Just as Netflix built up its own catalogue of exclusive content to drive user growth and engagement, so too is Spotify in the audio space. In turn, Spotify is increasing the opportunity to convert music listeners to podcast listeners which carry even more attractive economics than music. Over time, this reduces Spotify’s reliance on, and increases their bargaining power with, the labels.

Importantly, we believe the cash flows generated by Spotify are particularly high quality in nature. Spotify costs the consumer a tiny fraction of their income and delivers outsized value in return. Through this lens, we view Spotify as owning a very senior claim on consumer incomes which makes Spotify’s cash flows very predictable and resilient under most economic conditions.

We remain in the early innings of global digital music streaming adoption. Of almost three billion payment-enabled active smartphones worldwide today, only around 10 per cent have a digital music streaming subscription. As the consumer continues to digitise, and the more digital-native younger generations grow older – more than 70 per cent of Spotify’s users are under the age of 37 today – this adoption rate will continue to increase– irrespective of the business cycle or any geopolitical risks. 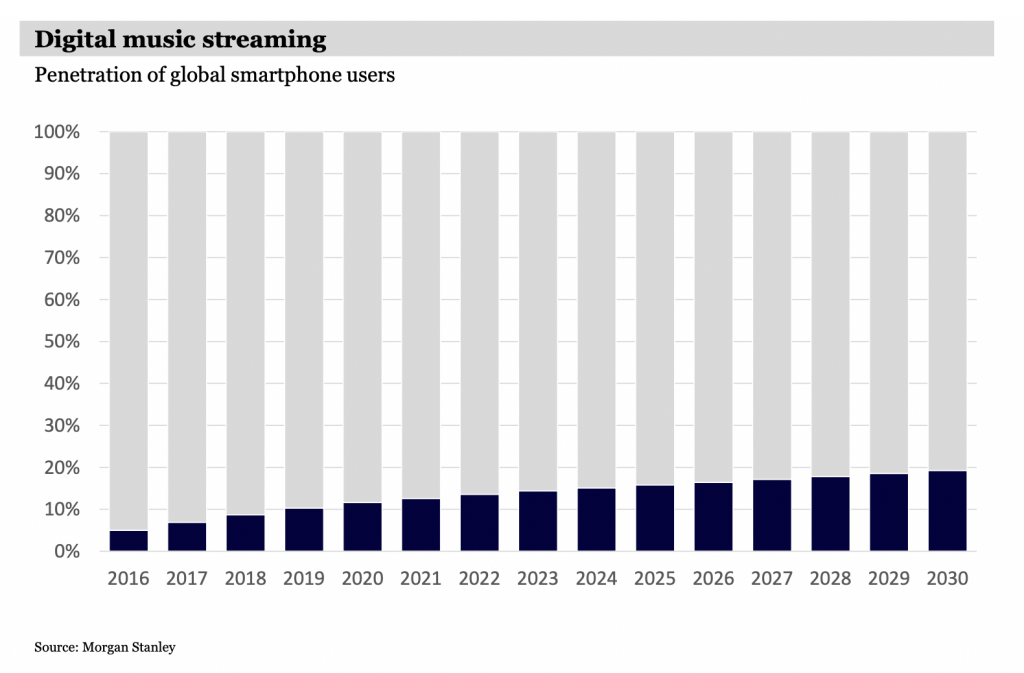 Analysing the listening preferences of younger generations relative to older generations, podcast consumption is also going to continue increasing structurally. While just 10 per cent of people aged 55 regularly listen to podcasts, more than 40 per cent of those aged 18 to 34 tune-in to podcasts. This is also positive for Spotify’s advertising business: podcasts are much longer in duration than typical music listening sessions and can therefore carry higher ad impression loads, and the podcast listener is typically a higher value target for advertisers. 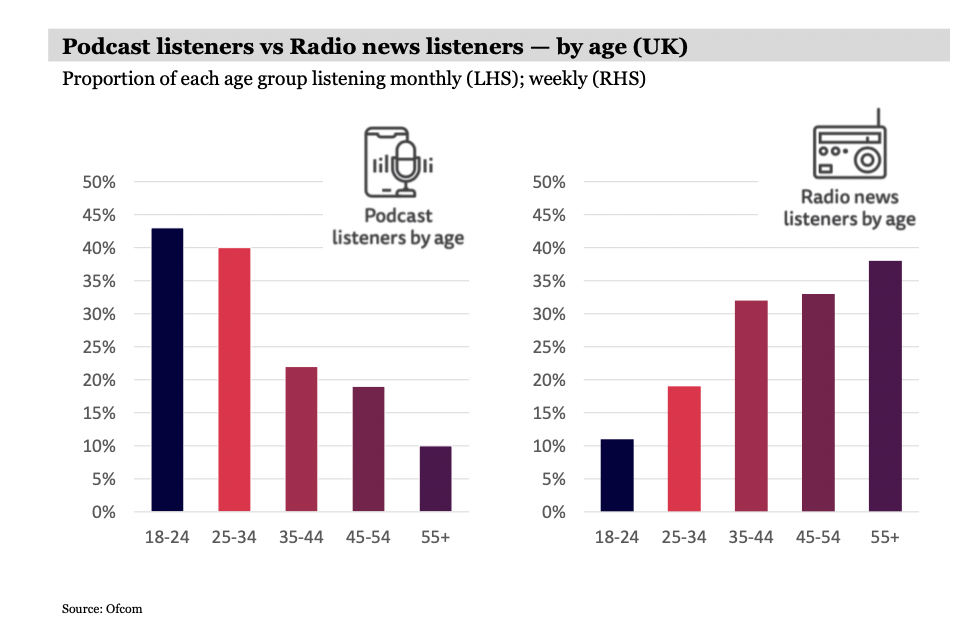 Finally, we would not be surprised if Facebook tried to acquire Spotify. Under Facebook’s ownership, Spotify’s user growth could be accelerated by accessing Facebook’s three billion members around the world. Facebook could likely extract significantly more value out of Spotify’s advertising business than Spotify could on its own, and Spotify’s bargaining power with the labels would only increase under Facebook’s ownership, thereby improving its earnings power. In return Spotify would give Facebook a highly sought-after recurring subscription revenue stream.

We believe that Spotify will be a long-term winner in a marketplace which is both attractive and growing. Our analysis suggests there remains substantial upside potential in the stock, notwithstanding its strong run over recent months.

We are delighted to announce the launch of the Montaka Global Extension Fund (Quoted Managed Hedge Fund) (ASX: MKAX). This new fund gives investors access to a portfolio of global growth opportunities through one online trade. You can also register to receive more information about the fund here: MKAX: Register Your Interest

The Montgomery Global Funds and Montaka own shares in Spotify and Facebook. This article was prepared 17 July with the information we have today, and our view may change. It does not constitute formal advice or professional investment advice. If you wish to trade these companies you should seek financial advice.