Why investors have lost their taste for Treasury Wine Estates

You’d think that Australia’s global winemaker and distributor, Treasury Wine Estates (ASX:TWE), would be reasonably immune to the effects of the COVID-19 pandemic. But the owner of famous brands like Wolf Blass, Lindemans and Penfolds is also feeling the pinch, with its latest trading update pointing to a tough year ahead.

Having materially reduced market expectations in January this year, Treasury has released another trading update for the 2020 financial year which is likely to see sell side consensus forecasts fall further.

The company now expects earnings before interest, tax and SGARA accounting (EBITS) in FY20 to be between A$530 million and A$540 million. This compares to management’s guidance of A$716-750 million at the interim result, which was then withdrawn on 25 February.

The table below shows howTreasury’s EBITS guidance has been dramatically reduced over the last nine months.

The causes of the deterioration over this period were first the impact of the large US vintage on North American price competition, then the collapse in Chinese demand for Treasury’s luxury wine in February and March from the COVID-19 outbreak, and more recently the impact on on-premise and cellar demand in developed markets from the global pandemic.

In the latest update, the impact of the COVID-19 pandemic moving beyond China, and resulting lockdowns in the company’s major markets, all but stopped on-premise and cellar door sales dead during April and May. Cellar door and on premise sales represent around 12 per cent of volume and 25 per cent of revenue in ANZ and the US. The materially higher revenue contribution relative to volume is due to on premise and cellar door sales skewing far more significantly toward higher end premium (the term masstige is marketing gibberish) and luxury wines than sales in retail stores. This skew toward higher unit price products also means these channels deliver materially higher margins to the group.

The negative channel mix shift adds to the margin squeeze and volume weakness Treasury was already experiencing in the commercial and lower end premium categories from increase private label and virtual brands as a result of the oversupply in the Californian wine industry.

If we break down the guidance between 1H20 and 2H20, we see a far more dramatic deterioration, with 2H20 group EBITS down 50 per cent on 1H19 levels to approximately A$168 million. On a divisional basis, the figures provided by the company imply that 2H20 EBITS for every division is between 36 per cent and 57 per cent lower than the same time last year with the Americas division recording the largest drop. 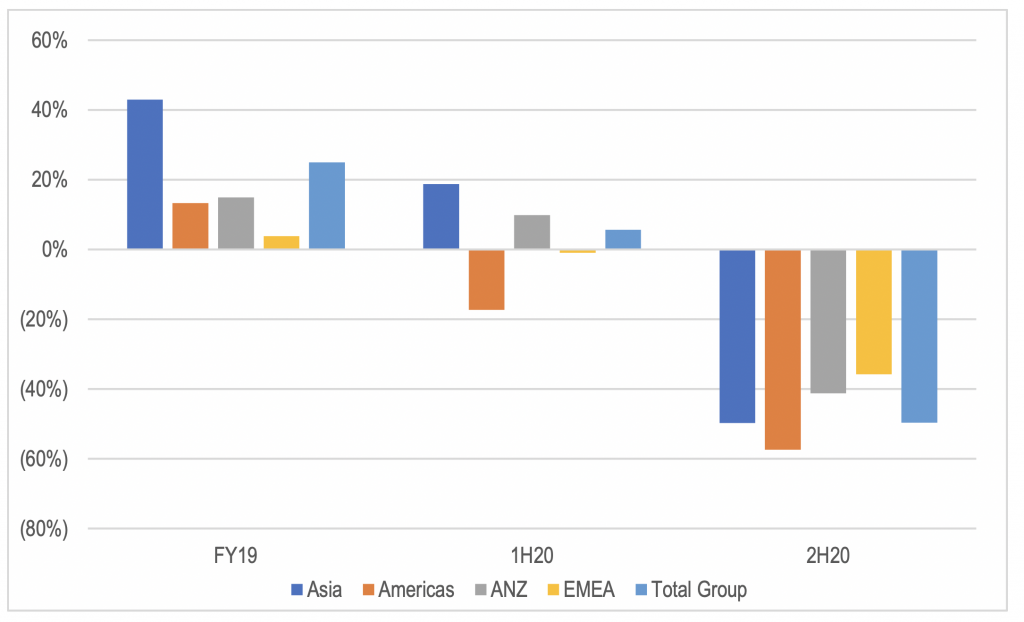 The materiality of the collapse in second half EBITS implied by the updated guidance is shown in the chart below. 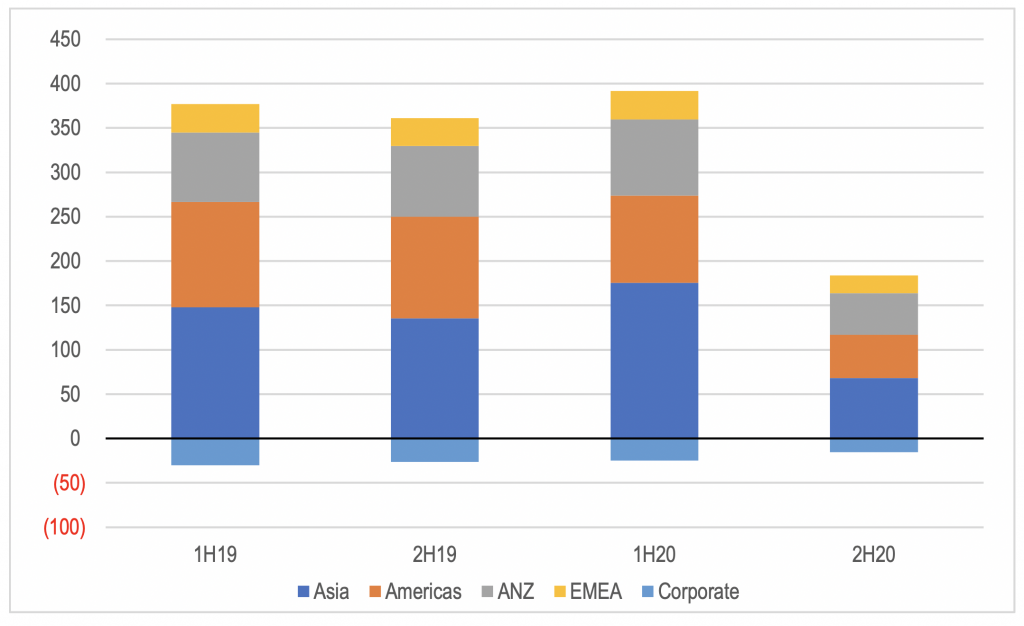 In looking at the FY21 outlook, it is not surprising that the company has effectively backed away from its statement on 25 February that its 10-15% per cent growth guidance off the previously expected FY20 EBITS base (implying A$788-862 million EBITS) would be largely unaffected as long as COVID-19 was resolved by year end.

In addition to the ongoing effects of COVID-19 on its end markets, one of the primary reasons for the removal of explicit guidance for FY21 was the 30 per cent reduction in the company’s Australian intake from the 2020 vintage. This will see Treasury’s unit cost base increase materially on 2020 vintage wines relative to 2019 wines due to the largely fixed cost of processing. As a rough estimate, this will increase the unit cost base of the 2020 vintage by around 4-5 per cent, which will feed through to overall unit COGS as the 2020 vintage is shipped over the next 3-5 years. In FY21, it will flow through to the unit COGS of Treasury’s highly price sensitive commercial and lower end premium wine labels. They estimate this will act as a A$50 million drag on EBITS in FY21 relative to FY20.

The impact of the small vintage in Australia on Treasury’s unit cost base is likely to exacerbate its already weakened competitive position in the US market in the commercial and premium segments resulting from industry oversupply and falling Californian raw material and bulk wine prices.

Clearly, the 2H20 EBITS performance of the Asian business understates the current earnings trajectory given the bulk of the impact occurred in February and March with depletions down 50 per cent. The company commented that hospitality events, which are key consumption occasions for luxury wines in that market, are starting to recover, especially in Eastern and Southern China, with depletions having turned slightly positive in April and May.

ANZ should also see some improvement relative to the 2H20 EBITS run rate given the reopening of on-premise venues, but it unlikely to go back to the pre-COVID level in FY21.

But the fall off in the Americans business in 2H20 is at greater risk of a more muted recovery FY21 given the second wave of infections that is emerging in the US.

With a full year impact of the oversupply in the US market, A$50 million of higher COGS, and ongoing constraints on high margin channels in key markets for the foreseeable future, offset by A$35 million of cost savings forecast to come through from the reorganisation of the US business, FY21 is shaping up to be another tough year for the group.

According to Bloomberg, the average sell side forecast for EBITS in FY21 is A$629 million, representing 17.5 per cent growth relative to the midpoint of the company’s FY20 guidance range. That might not sound too difficult given the recovery in economies from the low during the lockdowns. However, if we isolate the 2H20 results and annualise them with an adjustment for seasonality, the run rate from 2H20 is around A$350 million of annualised EBITS. This is more indicative of the level from which the business will recover post the lockdowns. This is a long way from the FY20 EBITS guidance of A$530-540 million let alone current consensus in FY21 of A$629 million.

While the revised guidance for FY20 EBITS will see sell side consensus forecasts fall around 6-7 per cent, the forecast for FY21 would need to fall considerably more to reflect the current trading performance of the business.