What to make of the May retail sales figures

The Australian Bureau of Statistics has just released retail sales figures for the month of May.  Contrary to market expectations, sales remained strong. But is this as good as it gets before rising living expenses eat into discretionary spending? Or will the build-up in pandemic-related household savings, and our strong labour market, continue to drive growth in consumer spending?

Retailers have been hit particularly hard over the last six months as the market became increasingly nervous about the economic outlook and growing pressure on household budgets from accelerating prices for utilities and food, as well as the impact of rising mortgage rates as the RBA rapidly shifts monetary policy settings from emergency to neutral settings.

Therefore, current retail conditions are viewed as being less relevant than normal. Having said this, the May retail sales data released by the ABS remained strong, particularly for food and department stores.

Most of the reporting of this data quotes the month-on-month growth on a seasonally adjusted basis. Given that companies report growth on a year-on-year basis, I prefer to look at the original monthly data relative to the same month in the prior year.

Figure 1: Retail Sales – percentage growth on the same month in the prior year

Year-on-year retail sales growth in May was particularly strong in cafés, restaurants, and clothing/footwear as the economy continues to reopen after the pandemic.

Of course, the other issue is the impact of the COVID pandemic on the year-on-year growth rates due to its impact on the prior year figures. If we instead look at the compound annual growth relative to the same month in 2019, this will provide an indication of the strength in each category relative to what can be considered more sustainable trend numbers. 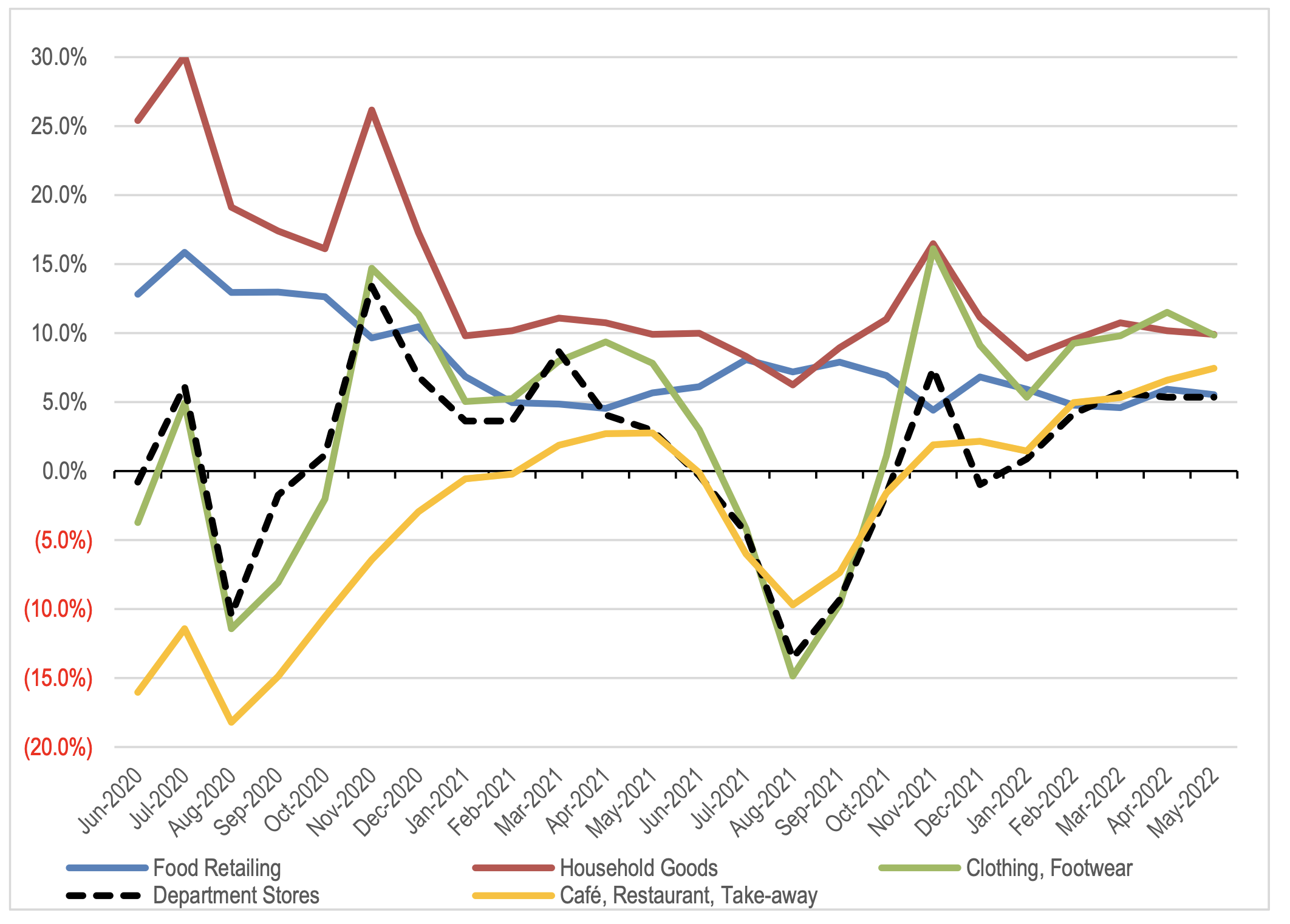 The chart shows how strong household goods retailer sales have been right through COVID. It also clearly shows the impact of the lockdowns in the second half of 2020 and July-Sept 21 on eating out, departments stores and clothing retailing. Clothing/footwear sales appeared to spike in 4Q21 making up for some of the lost sales in 3Q21 from the lockdowns in NSW and VIC. We then saw a dip off in the March quarter of 2022. This has now recovered, returning to strong levels relative to 2019 over the last four to five months.

The ‘glass is half empty’ argument is that having grown strongly relative to 2019, sales are above sustainable levels and will revert to trend and then below trend as rising living expenses eat into discretionary spending.

The category that produced surprising results is food retailing. Sales growth benefited in the early part of the pandemic as people were forced to eat more frequently from home due to lockdowns restricting access to eating out, as well as working from home. Periodic lockdowns during the pandemic, namely the second half of 2021 in NSW and VIC also boosted supermarket sales. In 2022, sales growth remained at fairly moderate levels relative to 2019 levels to date.

Given accelerating inflation through the period, it would be logical to have expected some acceleration in supermarket sales growth. The data implies that consumers are either trading down to lower priced substitutes, cutting luxury items from their baskets, or reducing volumes purchased. The comments from the major supermarkets to date indicate that they are not seeing trading down to value by consumers at this stage. Therefore, the data might indicate that there has been a volume offset to inflation.