Home » Investor Insights » Latest Insights » What to make of the Gamestop short squeeze?

What to make of the Gamestop short squeeze?

The developments in recent weeks in relation to trading in Gamestop, a US-listed mall-based retailer of video games, have been fascinating for a whole host of reasons.  Not the least of these has been how poorly-understood the whole episode has been.

To briefly recap, shares in Gamestop (GME) went on an absolute tear in late January, before crashing back down in early February. Prior to the rise, approximately 140 per cent of Gamestop shares had been sold short, and the rush by short sellers to buy back stock to close their positions contributed significantly to the wild share price ride, set out below. 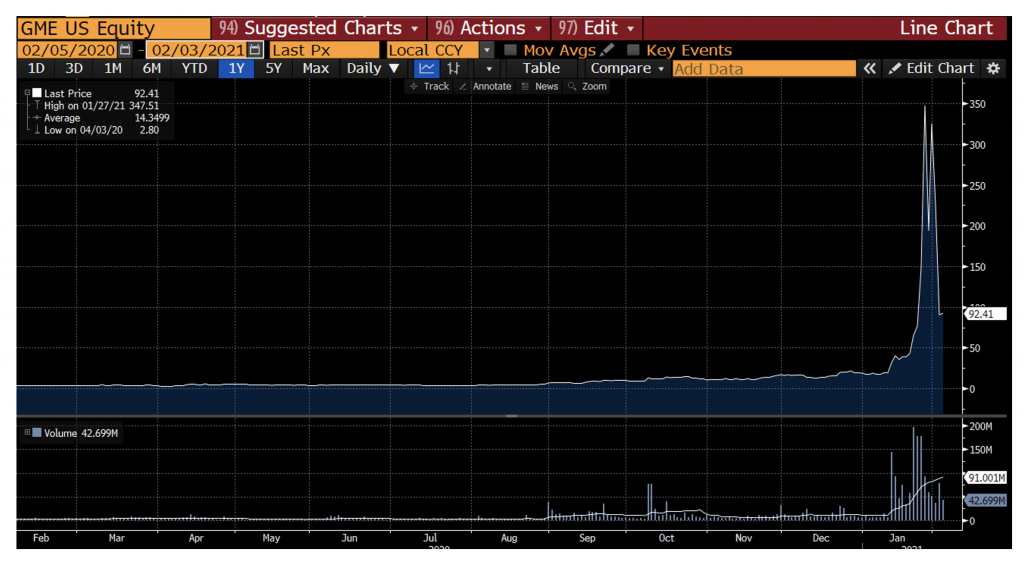 A very high-level short selling does, however, make for an almighty rush to buy shares if those short sellers suddenly feel the need to close their positions to reduce risk. Users of the r/wallstreetbets subreddit (an internet forum) recognised this, and aggressively bought GME shares, driving up the price and forcing short sellers into exactly that almighty rush, which then became self-reinforcing.

One of the surprising aspects of this is the extent to which a wide range of market observers have applauded the ability to smaller retail shareholders to wrest control of a “rigged” stock market and punish the wealthy hedge fund titans who had sought to profit from short selling. Elon Musk seemed to cheer on the subredditors by tweeting “Gamestonk” as the price rose, and when retail brokerage Robinhood was forced to curtail trading in Gamestop shares to rein in spiralling collateral obligations (imposed by stock market clearing houses), it was condemned by politicians from both sides of the aisle.

There are many observations that can be drawn from this, but one that stands out to me is a misunderstanding of what equity markets are there for and what we want from them.  One of the critical functions of the equity markets is to facilitate the flow of capital to businesses that are deserving of it, that they might invest in productive capacity and contribute to economic development.

This very worthwhile goal is best served when markets are reasonably efficient, share prices reflect underlying reality, and those companies most deserving of capital are the ones that can most readily access it. Active equity investors contribute to this outcome to the extent that they identify fundamental mispricing and, through their trading, apply pressure to correct it.

Short sellers contribute to this process as much as anyone. Self-interest drives many investors to believe that short selling that might lower share prices is inherently evil, but we should keep in mind the difference between investor self-interest and the collective good, which is better served by fair stock prices and modest levels of volatility.

The Gamestop squeeze resulted in some wealthy hedge fund managers suffering crippling business losses, and this is a class of people it is hard to feel sorry for. However, the real losses were suffered by the investors in those hedge funds, many of whom had simply entrusted their retirement savings to institutions who then allocated to the hedge funds.

Many retail investors who were late to join the party will also have suffered devastating losses, while those who led the charge and got out before reality returned will have profited handsomely.

While it may be hard to feel sorry for the pain suffered by wealthy hedge fund managers, the Gamestop experience is damaging to equity markets and to a wide range of investors, and a horde of inexperienced retail traders using leverage and social media to push share prices way beyond fair value is not something that we should be cheering on.