What accelerating business loan book growth means for the banks

The Australian Prudential Regulation Authority (APRA) and the Reserve Bank of Australia (RBA) released lending and deposit statistics for April last week. The data shows a continuation of the acceleration in loan book growth, which is now running at its highest level since 2008.

Business lending growth has continued to accelerate while mortgage lending growth appears to have stabilised. Business loan book growth is now at its highest levels since the start of the GFC as businesses spend to support their re-emergence from the COVID lockdowns, while coping with high levels of competition in the economy for scarce labour.

Overall credit growth continues to accelerate and increased to 8.6 per cent year on year in April. The current level of growth remains well below the peak from the end of 2007 but above anything seen in the last 10 years. 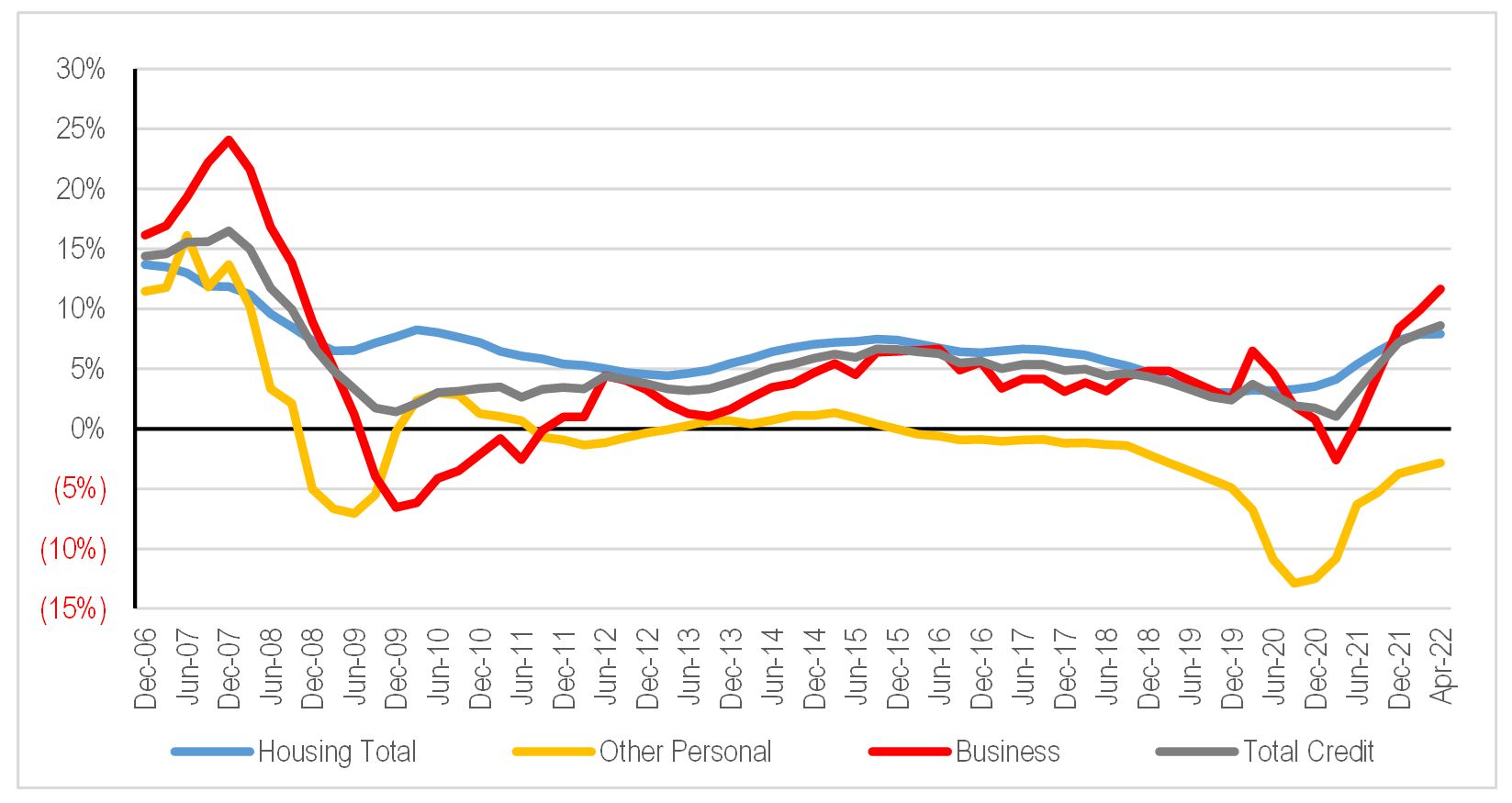 Business loan book growth is contributing a larger share of overall loan book growth for the banks. As shown in the chart below, business lending growth is far more cyclical than mortgage lending growth. Therefore, the sustainability of the current strong growth in the medium term will depend on how successfully the RBA walks the tight rope between raise rates to quell inflation while not sending the economy into a recession. 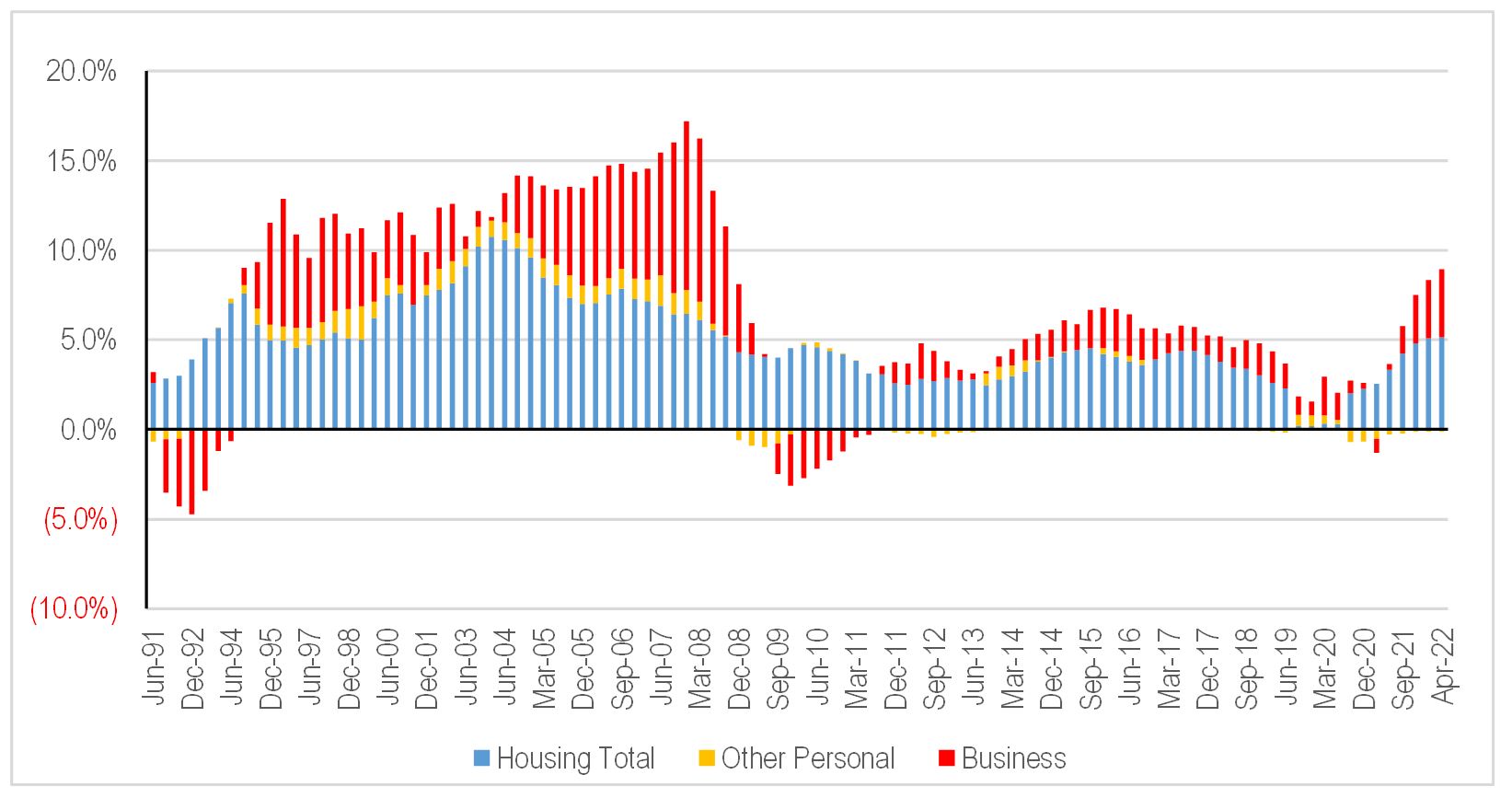 Turning to the performance of the individual major banks, National Australia Bank (ASX:NAB) and the Commonwealth Bank of Australia (ASX:CBA) are widening the gap to Australia and New Zealand Banking Group (ASX:ANZ) and Westpac Banking Corp (ASX:WBC) in terms of loan book growth.

This is not surprising given the mortgage processing issues experienced by WBC and ANZ, but it is also the result of the relatively strong position CBA and NAB enjoy in the SME and business (as opposed to institutional) lending markets. 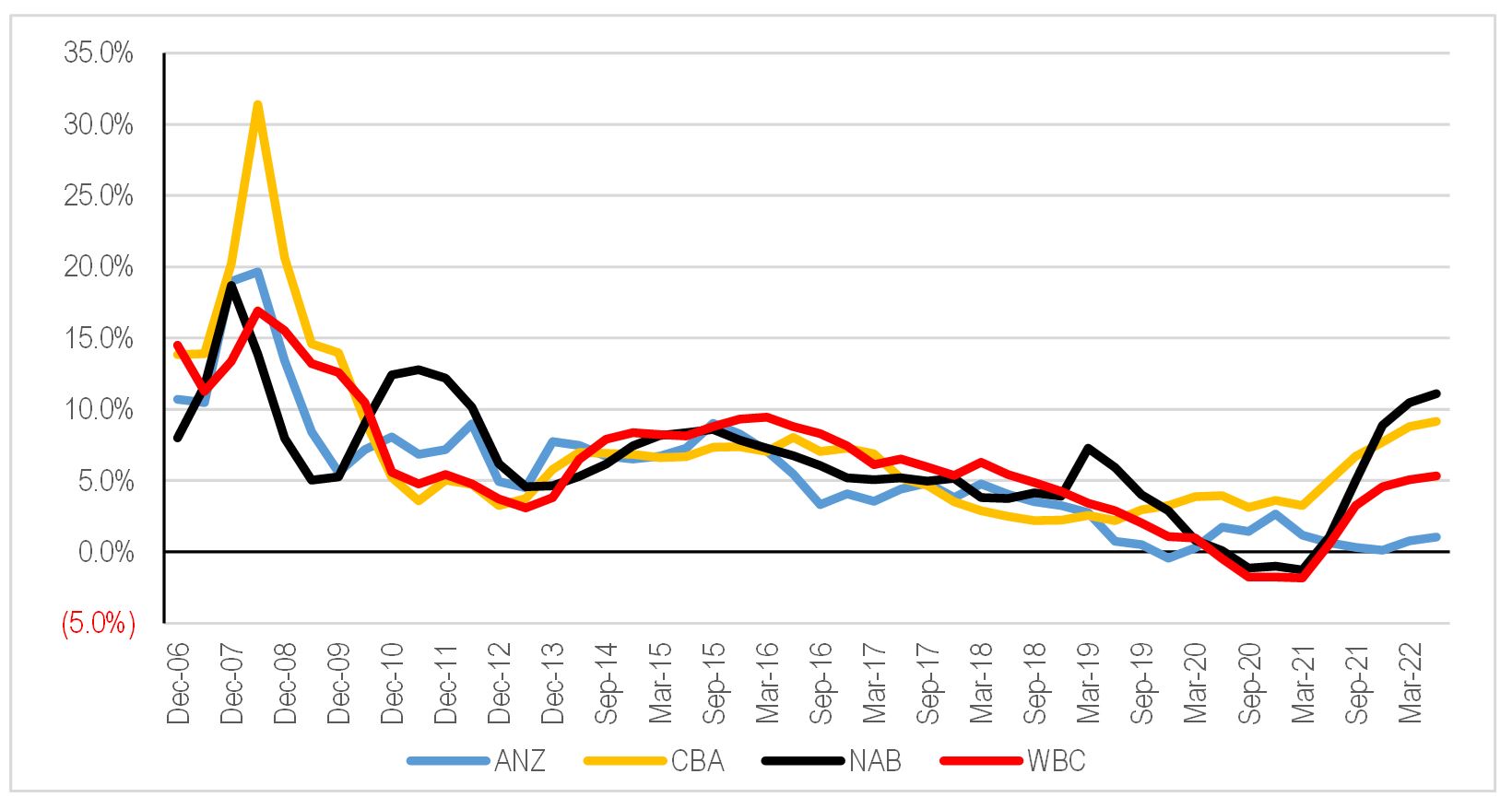 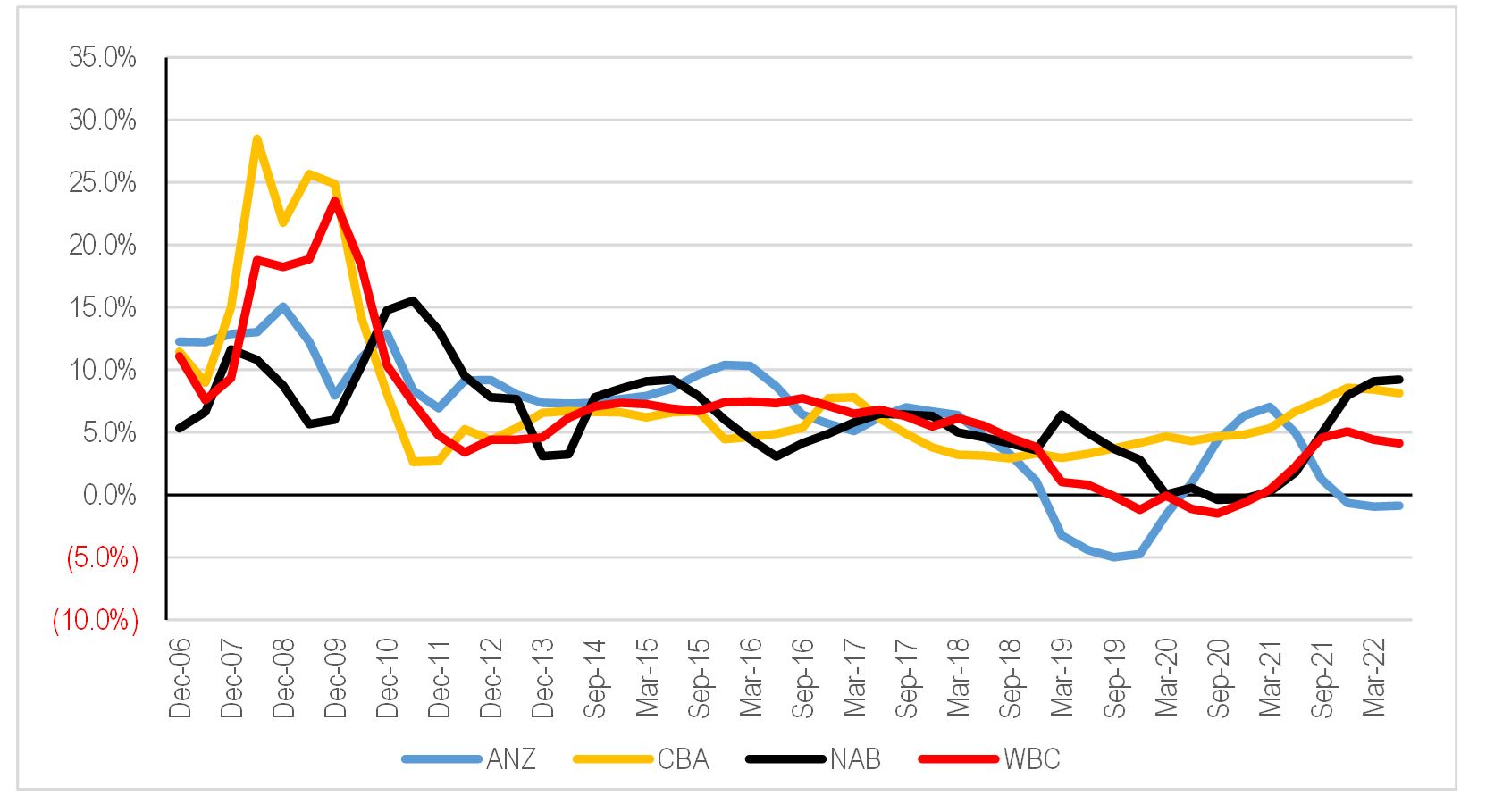 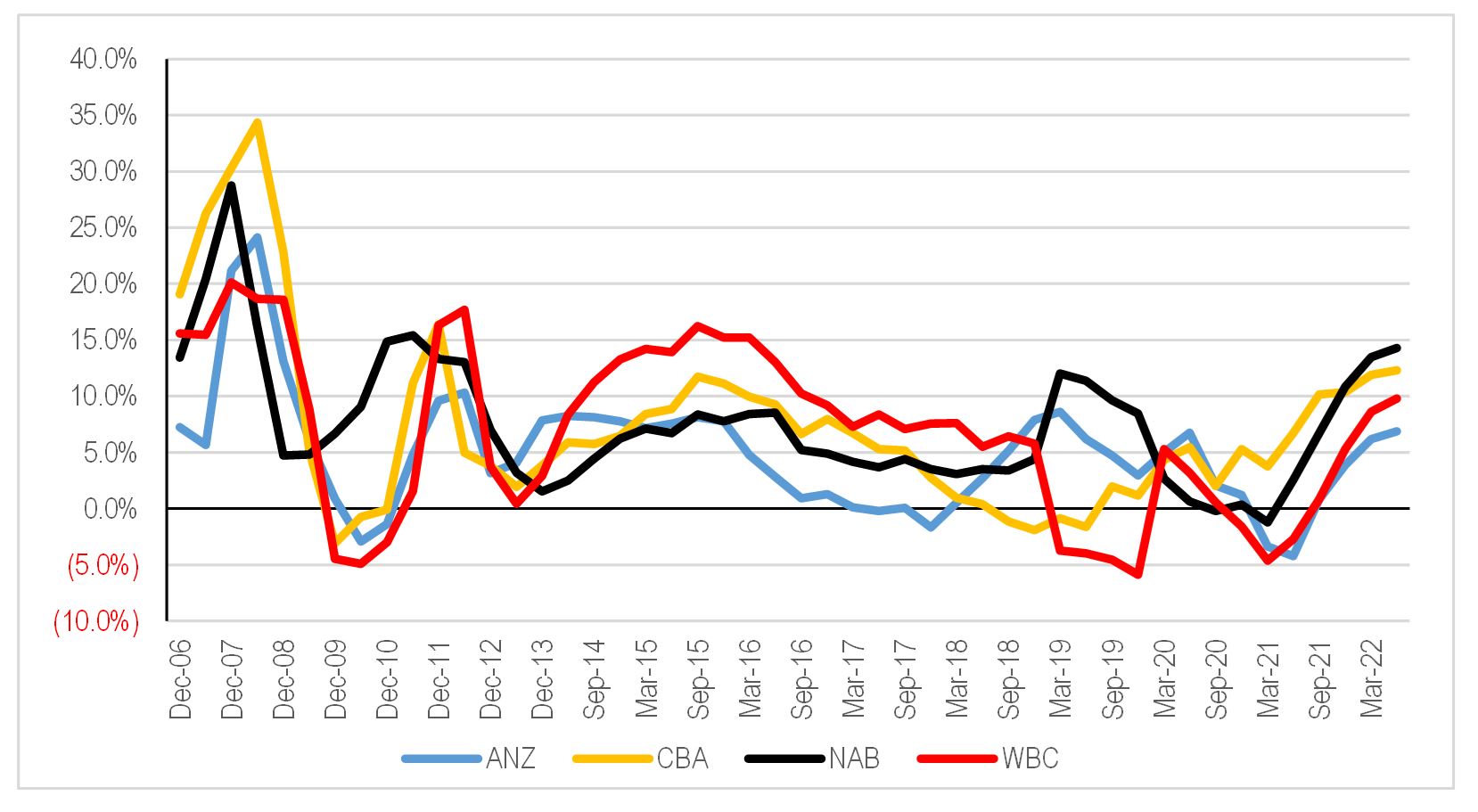 Banks have been material outperformers in the calendar year to date as market concerns around falling net interest margins resulting from front book discounting and dilution from liquids portfolio returns has reversed on the back of the expectation that the RBA will raise official rates rapidly in the coming months. This could see the strong growth in loan book growth boosted by sequential improvements in net interest margins as well move through calendar 2002.

Given their stronger loan book growth, NAB and CBA are better placed to benefit from this improved outlook for net interest margins.

However, as we move further through the economic cycle, the market is likely to begin rolling the investment horizon forward to when tightened monetary conditions feed through to economic activity. This would see lending growth slow, particularly business lending and risks around the quality of loan books rise.

The RBA is walking a very fine line between dampening down what has become more sustained and significantly higher rates of inflation than was expected during the pandemic, and trying to prevent the necessary slowing of demand turning into a recession. Inevitably the market will have bouts of fear regarding the potential for increased loan losses during this period. As such, investors need to be wary of excessive optimism being baked into bank share prices on the back of near term operating conditions.

The Montgomery Funds owns shares in the National Australia Bank and Commonwealth Bank of Australia. This article was prepared 06 June 2022 with the information we have today, and our view may change. It does not constitute formal advice or professional investment advice. If you wish to trade these companies you should seek financial advice.