Three reasons why we have held Reliance through recent price volatility

Reliance Worldwide (ASX:RWC) has been a recent introduction to the portfolio. The company sells innovative and simple plumbing fixtures to enhance productivity and efficiency for end users. Reliance’s core product is the “Push-to-Connect” (PTC) fitting to connect two ends of a pipe, marketed under the Sharkbite brand.  The “PTC” story is one of market penetration given the time efficiency benefits and versatility of the product for end-users vs other methods such as crimp, press and solder. Reliance is also looking to leverage its suite of products for an entire plumbing solution for both residential and commercial buildings.

We view Reliance as a quality company with a strong management team and solid medium-term growth prospects on a genuinely global platform. However, the share price has gone through some turbulence over the past few months – exacerbated by a significant sell down of shares by the previous owner / Chairman, a lack of a “winter freeze” event that impacted sales by approximately $12-15 million, concerns around the impact of Brexit and sales dis-synergies on its recent John Guest acquisition.

While the above factors were largely known by the market and quantified via an earnings downgrade in mid-May, we became aware of a new threat potentially emerging over the past few weeks – namely the launch of a competing private-label push-to-connect product by one of Reliance’s distribution partners – Ferguson.

With over 1400 locations across the US, Ferguson represents a significant customer for RWC’s push-to-connect products. While our estimated sales impact to RWC was small (maximum of US$20 million, or around 2 per cent of group sales) our view was the market’s reaction to this news when more widely disseminated would be greater than the estimated impact on revenue and profitability.

Despite anticipating a potentially negative share price over-reaction to this development, the Montgomery portfolios elected to keep a sizeable shareholding in the company. In making this decision, we took into account several factors:

One may argue that the company being exposed to cyclical forces implies it is lower quality, the truth is there are very few businesses globally that are not exposed to some cycle or another.

Reliance is one of the few businesses listed in Australia with an established global footprint with prospects for sustained medium-term growth. The company has not only spent significant dollars, but also time and years investing in engineering, supply chain, distribution, R&D and marketing to build a formidable position in its major markets. 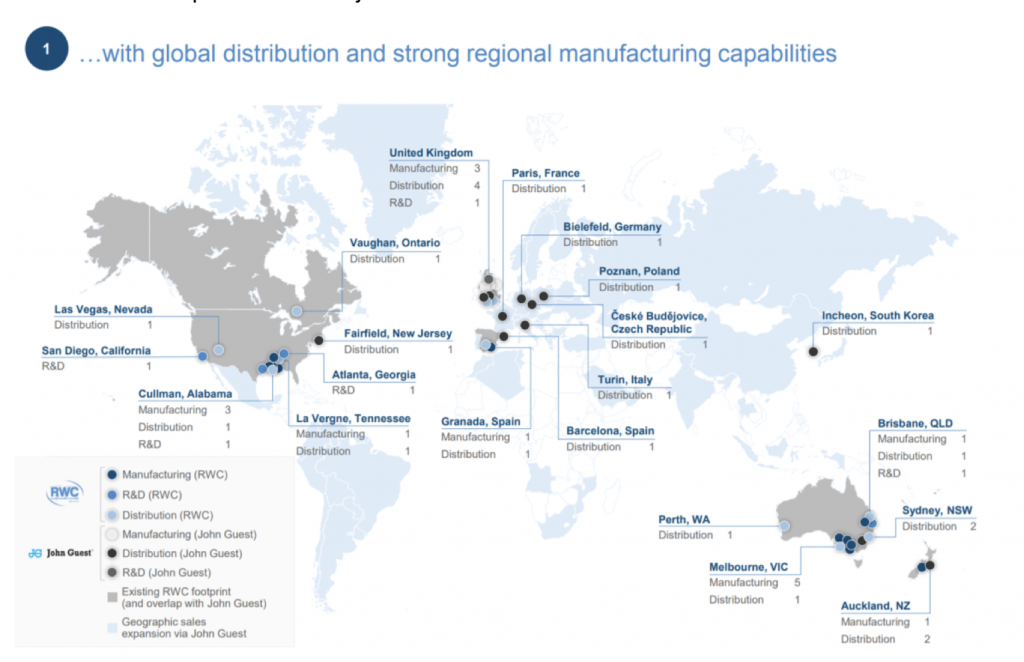 While advances in global technology have lowered barriers to entry in many businesses (especially for technology-based capital-light companies), building a vertically integrated industrials business of this scale through a combination of organic growth and complimentary acquisitions (more than  A$1 billion of sales) is not readily replicated. For context, as CEO Heath Sharpe has noted, it took 10 years for Sharkbite to get to $100 million of sales.

Competitors are a fact of life in almost every industry. It is relatively easy to construct bear arguments for the Reliance business – especially around longer-term gross margins – when viewing RWC’s product suite through a commodity-like lens. In fact, RWC’s gross profit margins are a major reason why the product attracts competitors in the first place.

Reliance enjoys healthy margins given its focus on customer service and an uncompromising view on brand strength and loyalty. Given the function of (i.e. connecting pipes without leaks, including behind-the-wall) versus relative price point of the core push-to-connect product, it is easier to understand why brand strength provides a competitive advantage given the potential damage and warranty concerns caused by a faulty product.

Core to our central investment thesis for Reliance is brand. Assuming every me-too (or in this case, “Fake-bite”) business will be successful understates the years of investment built into marketing – both on a national and grassroots level. Gatorbite and Blue Hawk are two prior examples (not to mention Tectite – sold in select Home Depot stores) that have failed to gain meaningful traction.

It’s entirely possible Plumbite – Ferguson’s private label brand – is here to stay, but assuming guaranteed overnight success and significant change to the competitive landscape appears pre-emptive. While every example is different, you’d be hard pressed to find someone selling A2 Milk shares just because Bellamy’s (or Nestle / Danone for that matter) released a new infant formula.

While the share price did sell off in the case of Reliance (to a low of $3.10/sh), it is not always possible to predict when the best time is to buy back in on impending “negative” news. In most examples the share price provides a good guide, but given the potential threat of a new competitor, it is almost always uncertain how other investors would respond.

In this situation, a solid FY19 result versus revised expectations – showing improved cash-flow and working capital management – as well as a top-line that demonstrated a level of resilience and allaying concerns of a new competitor was enough to spark a rally in the shares. A wait-and-see approach before uncertainty fades would have quickly eroded potential gains on re-entry.

In this example, how other investors may perceive the risk is important to anticipate and understand. The Plumbite threat had greater credibility for 2 reasons – the new entrant was Private Label with national US distribution in place; and Ferguson has a reputation as a “go-to” destination for plumbing pros.

As earlier noted, there was also uncertainty around the potential quantum of lost sales; given Ferguson’s 1400 locations, it’s likely that some estimates of lost sales far exceeded our own. The approximate 15-20 per cent fall in the share price from $3.75/share to $3.10/share had implied over US$40 million of lost sales – double our high-end estimate. RWC’s own estimated impact is less than 1 per cent of group sales, as other customers stock greater levels of Sharkbite product in anticipation of taking share off Ferguson stores.

The business clearly has some external challenges – the 2H showed some margin decline, tariffs and Brexit loom as potential earnings impacts and the Plumbite entry may impact sales more than expected. Weather impacts are uncertain. There are also opportunities – cross selling of the expanded product range and its Big Box retailer experimenting with re-organising shelf space. In other words – business as usual for most companies in a dynamic world.

Given the relative maturity of the RWC business and product suite, delivering continuously compounding top-line growth will be more challenging over time – especially for a business without nascent network effects.

However, we remain attracted to RWC’s product suite and relative positioning in its end markets – and with an eye on relative valuation – it remains an active position in the Montgomery portfolios.

The Montgomery Fund and Montgomery [Private] Fund owns shares in Reliance Worldwide. This post was prepared 12 September with the information we have today, and our view may change. It does not constitute formal advice or professional investment advice. If you wish to trade Reliance Worldwide you should seek financial advice.