In December 2019, my colleague Gary Rollo, wrote “Is PointsBet Holdings worth a bet?” and the answer to this question was well and truly put to bed last Friday. In conjunction with reporting its results for the year to June 2020, PointsBet Holdings (ASX:PBH) announced an exclusive five-year company-making deal with NBC Universal Media, which offers the largest sports audience of any media company in the US. PBH will be NBC’s official sports betting partner. The share price responded by jumping 87 per cent from $7.50 to $14.00.

PointsBet will access NBC’s 184 million viewers including 60 million active users over digital platforms, across multiple sports as well as US$393 million in marketing spend over the five-year media partnership.

The total purchase value of NBC’s shares and options will be partially offset against the committed marketing spend and therefore significantly reduce the cash commitment over the five-year term.

PointsBet’s brand will be integrated in NBC Sports national television networks, which is delivered to virtually all US television households via its 200+ NBC-affiliated local television stations in key markets (including 11 owned and operated stations).  This will both dramatically accelerate PointsBet’s US penetration whilst significantly reducing the cost of customer acquisition.

Under the media partnership, PointsBet will become the Official Sports Betting Parnter of NBC Sports and this will include: 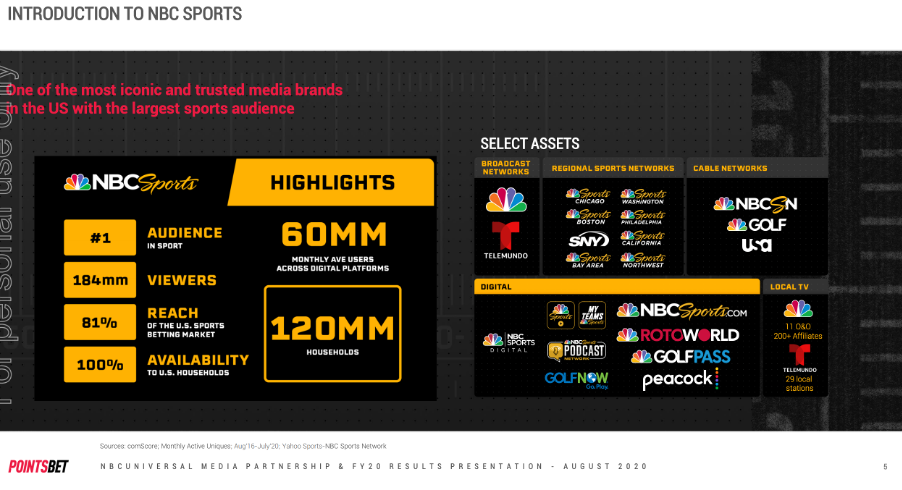 Estimates of the total US iGaming revenue and Sports wagering revenue market ranges between US$12 billion and US$20 billion by 2025; and to summarise, “There remains a once in a lifetime opportunity in the United States and PointsBet has already taken significant steps towards capitalising on this opportunity.”

Montgomery Funds own shares in PointsBet Holdings.  This article was prepared 02 September with the information we have today, and our view may change. It does not constitute formal advice or professional investment advice. If you wish to trade PointsBet Holdings you should seek financial advice.

One company we like is PointsBet holdings, and in conjunction with reporting its results for the year to June 2020, PointsBet announced an exclusive five-year deal with NBC Universal Media. The share price responded by jumping 87%. Click To Tweet