Australia’s two supermarket giants, Coles and Woolworths, have just reported their September quarter sales figures. While it’s hard to make comparisons with the same period last year – due to the impact of the COVID-19 lockdowns – there were some meaningful take-outs from the results.

Woolworths shares sold off following the release of its quarterly sales, primarily as a result of the lower than expected like-for-like sales growth reported in its core Australian Supermarkets division. The market was looking for this division to grow sales by between 4 and 5 per cent on a like-for-like basis in the quarter due to the impact of lockdowns in NSW and VIC, despite cycling 11.5 per cent growth in the same period last year.

The company reported growth of just 2.7 per cent in the September quarter.

Coles was expected to lose share to Woolworths in the period due to its weaker capability in online sales, and its relatively large exposure to CBD and mall store locations, which were negatively impacted by lockdowns due to changes in population movement patterns.

While Coles did report lower like-for-like sales growth than Woolworths at 1.4 per cent, the gap was smaller than expected.

Woolworths has outperformed Coles in terms of sales growth during lockdown periods. However, it appears the majority of the difference is from online sales. If we look at the sales growth for stores excluding e-commerce sales, the year over year (yoy) growth rates for both companies have been similar. 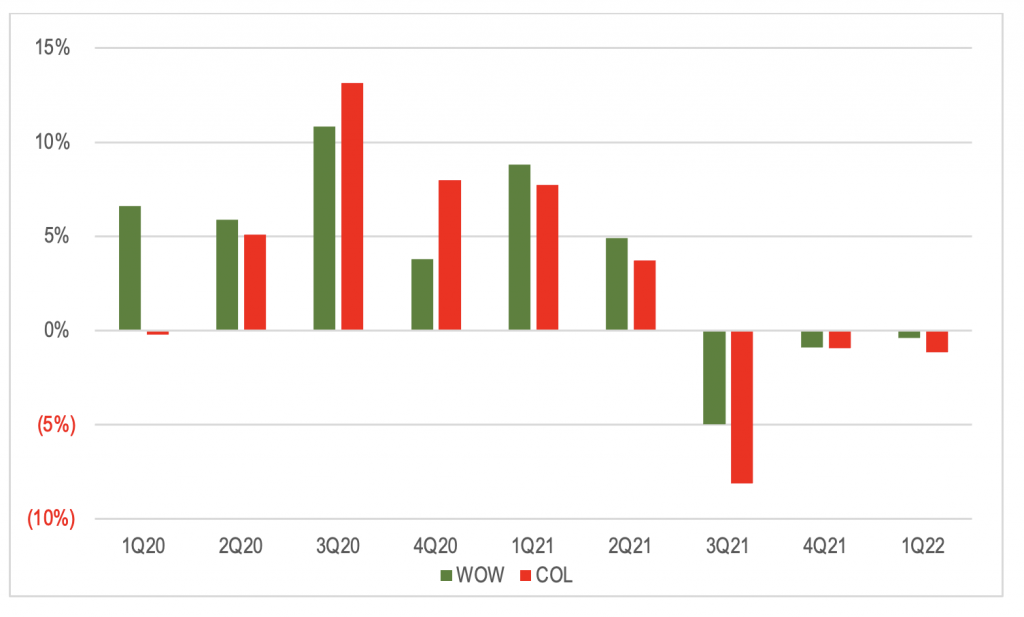 The contribution to overall sales growth coming from increased e-commerce shows the benefit Woolworths is generating from its investment in capacity and efficiency. It also demonstrates how important Coles’ planned customer fulfilment centres (CFC) and systems project in partnership with Ocado will be in neutralising this competitive disadvantage. 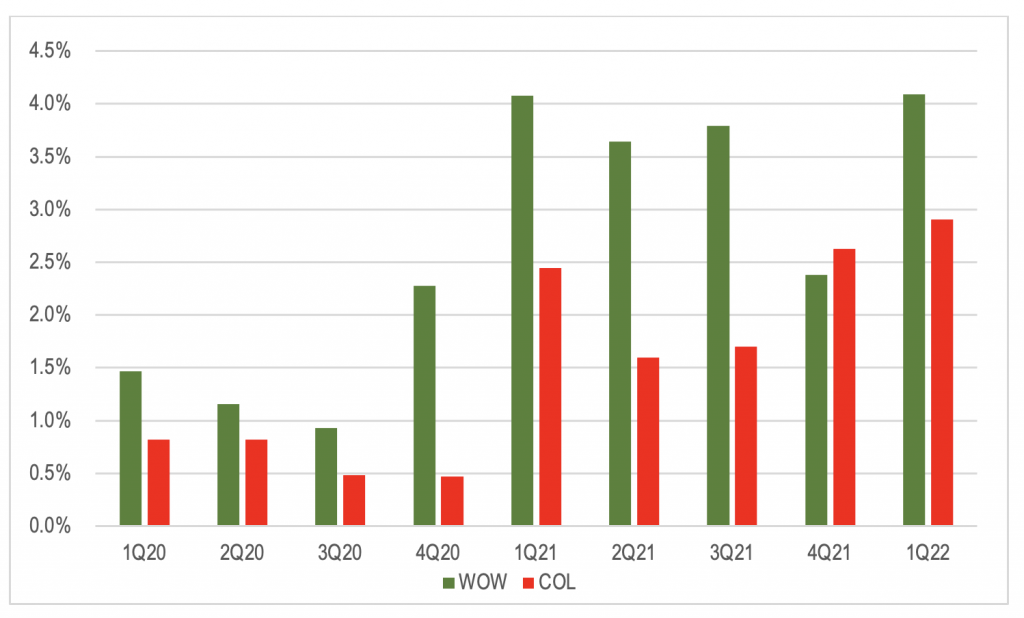 The market expected accelerating food inflation to create a growing positive tailwind for sales growth in the period. However, Woolworths noted a number of factors that continue to constrain inflation with overall average prices falling 0.9 per cent in the quarter.

While red meat prices have been rising rapidly on the back of higher export parity prices and reduced supply as farmers look to rebuild herds after the drought, fruit prices are down, driven primarily by extremely low avocado prices and lower than normal apple prices. Blueberry markets are also suffering from excess supply at present.

The other major factor was tobacco prices. The change to indexation of excise last year means that the prices of cigarettes and other tobacco products are not increasing as quickly as normal. Woolworths also noted that tobacco sales were unusually high in the September quarter last year as the lockdown in Melbourne forced the closure of tobacconists. This saw customers temporarily shift to buying products from the supermarkets.

These rates of growth would have met or exceeded market expectations for the period.

It is important to recognise that the gross profit margins generated on tobacco sales are lower than the overall supermarket average. Additionally, annual excise increases are generally passed through to prices with no mark-up by the supermarket operator, implying that the sales growth from higher excises generates no incremental gross profit for the supermarket operators. As a result, the drag on sales growth caused by lower tobacco has a proportionally lower impact on gross profit and EBIT with the shift in the mix of sales pushing up the average gross margin generated.

Woolworths noted that there is pressure building in dry grocery supplier costs and prices. Eventually these will need to be passed on to consumers. Additionally, the deflation in fruit prices is seen as temporary while meat price inflation is expected to continue to rise. This will see fresh food inflation accelerate from its current neutral position.

In October, sales growth remained at roughly the same rate for Coles while Woolworths has seen some moderation in growth rates.

The other concern for the market was COVID-19 related costs. Coles stated that COVID-19 related costs in its business were around A$75 million for the quarter, while Woolworths reported A$102 million of costs across its formats. These costs will persist through the rest of the year, albeit after peaking in October and reducing gradually over time.

The Montgomery Funds owns shares in Coles and Woolworths. This article was prepared 02 November 2021 with the information we have today, and our view may change. It does not constitute formal advice or professional investment advice. If you wish to trade these companies you should seek financial advice.