Home » Investor Insights » Latest Insights » Is it time to hit the ‘buy’ button?

Is it time to hit the ‘buy’ button?

If there’s one investing axiom to hang your hat on, it’s this: the lower the price you pay, the better your returns over the longer term. With the price-to-earnings (P/E) ratios of many high quality businesses compressing, I therefore think it’s time for long-term investors to buy while so many others are fearful.

P/E ratios have compressed materially and quickly. Most of the compression is due of course to rising bond yields, which in turn are a response to inflation concerns. But in some cases, some of the P/E compression can be attributable to rising earnings. Keep the latter point in mind.

Let’s talk about a bear market

While the averages are unlikely to be repeated (the events create the averages not the other way around) what is interesting is an investor who buys the S&P500 index today at 3900 would generate a return of 23.5 per cent over the next two years, three months and eight days. That’s equivalent to 9.75 per cent per annum if the market were to follow the averages.  And it is also only applicable to the index.

As we aren’t in the business of buying indices, rather we seek to own individual companies, the above ‘analysis’ is only useful in that history offers encouragement the market will reacquire its previous highs, eventually.

Encouraged by the prospect of an eventual broader market recovery we can now examine the arithmetic of investing in individual companies.

It matters not what the P/E ratio is, if they are the same at the time of acquisition and disposal, my return will equal the EPS growth rate achieved by the company.

We can take advantage of this bipolar behaviour by focusing buying activity around periods when sentiment, as reflected by P/E ratios, is depressed.

We can also take encouragement, from the reliable bipolar market behaviour, that P/Es will eventually reflect buoyant optimism again.

And further encouragement comes again from the arithmetic of EPS growth and P/E compression and expansion.

I have published Table 1. previously but it is worth dwelling upon again.

The column headings across the top represent the change in the P/E ratio at the end of the five-year period.

The intersection of the 15 per cent row and the -25 per cent column is 9 per cent. Nine per cent is the annual return to the investor, over five years, from buying shares in a company whose earnings per share grow at 15 per cent per annum and the P/E ratio declines by a quarter and fails to recover over the five years.

You will see a zero per cent return is received where the 15 per cent row intersects with the column representing a P/E contraction of 50 per cent. Buying a share of a company growing its EPS by 15 per cent per annum over five years, produces a nil return when the P/E ratio falls by half and stays there. The investor would also have to hold the shares for the five years to break even.

But a nine per cent return is received, even if the P/E ratio halves when shares are purchased in a company able to grow earnings by 25 per cent per year.

The best chance of attractive returns

It should be apparent by now buying shares in companies able to compound earnings at high rates over a long period, offers the best chance of attractive returns even if the popularity of shares were to collapse and remain in the doldrums.

But as we have previously noted, this is unlikely. PE ratios reflect popularity which swings frequently and reliably. 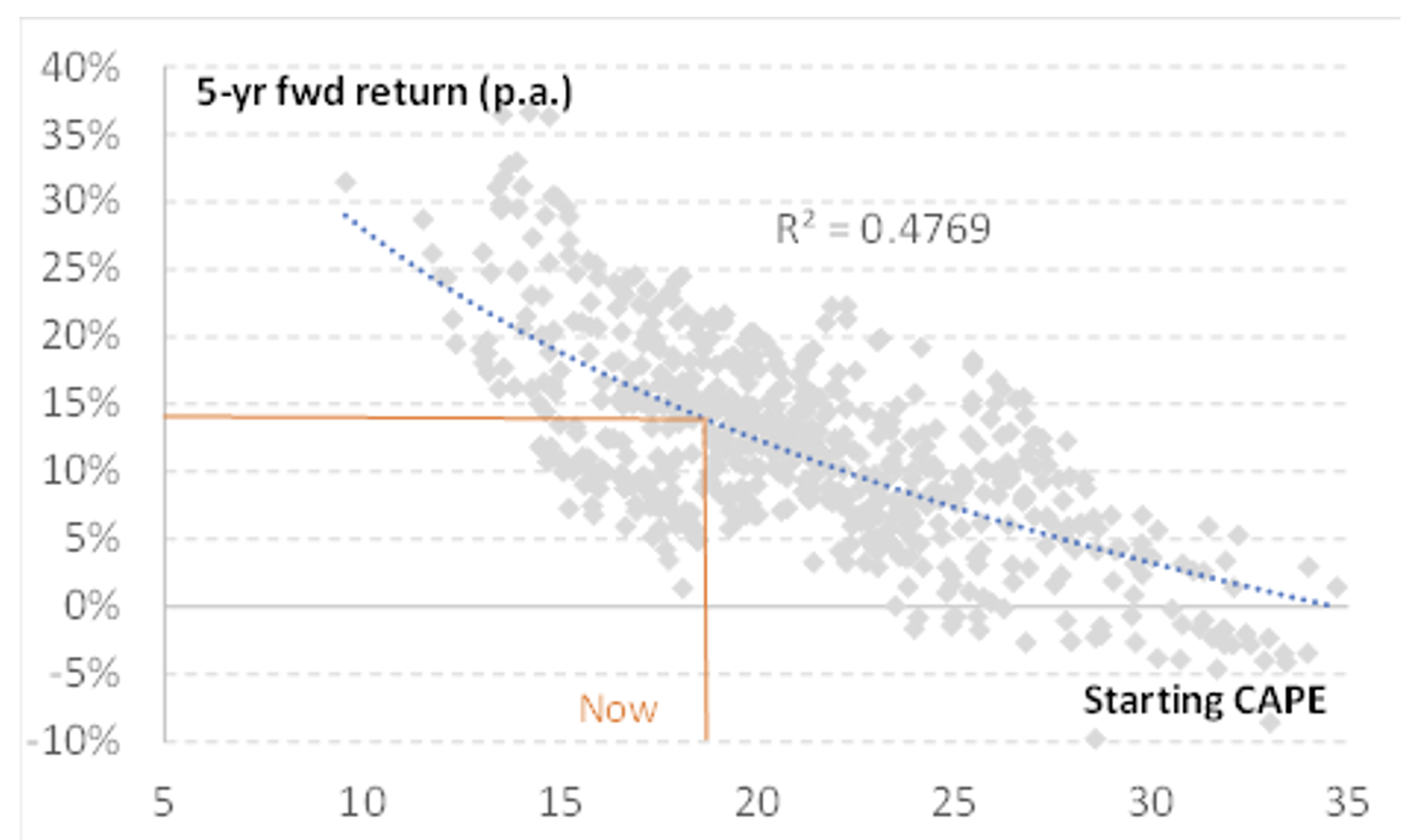 Finally, stockbroker MST have conducted historical analysis of returns from Australian shares based on the P/E at which the investment was made.  It is clear from the data, the axiom referred to earlier – the higher the price one pays, the lower the return and vice versa – holds true.  A higher starting P/E produces a lower return.

In any case, history and math is on the side of the long-term investor brave enough to invest when others are fearful, as they are today.