Car sales headaches may have unexpected benefit for The Montgomery Fund

In the lead up to the RBA’s first interest rate cut in several years, governor Philip Lowe noted the negative ‘wealth effect’ from falling house prices would be felt most acutely by those retailing motor vehicles and household furnishings.

Unsurprisingly, homewares retailer Adairs (ASX:ADH) announced that profits for 2019 would be 10 per cent lower than previous guidance of $48 million. And today the Federal Chamber of Automotive Industries (FCAI) announced that new vehicle sales for the 12 months through May, were down seven per cent, the largest annual decline in more than nine years.

Commsec has illustrated the somewhat obvious correlation between perceived wealth and discretionary spending on big ticket items in the chart below.  Australians spend less on luxury cars if they aren’t able to afford them or if their wealth – which is mostly tied up in property – is believed to be under threat. The chart only plots the past and it cannot help predict the future; on their own charts cannot tell you when they are going to turn. 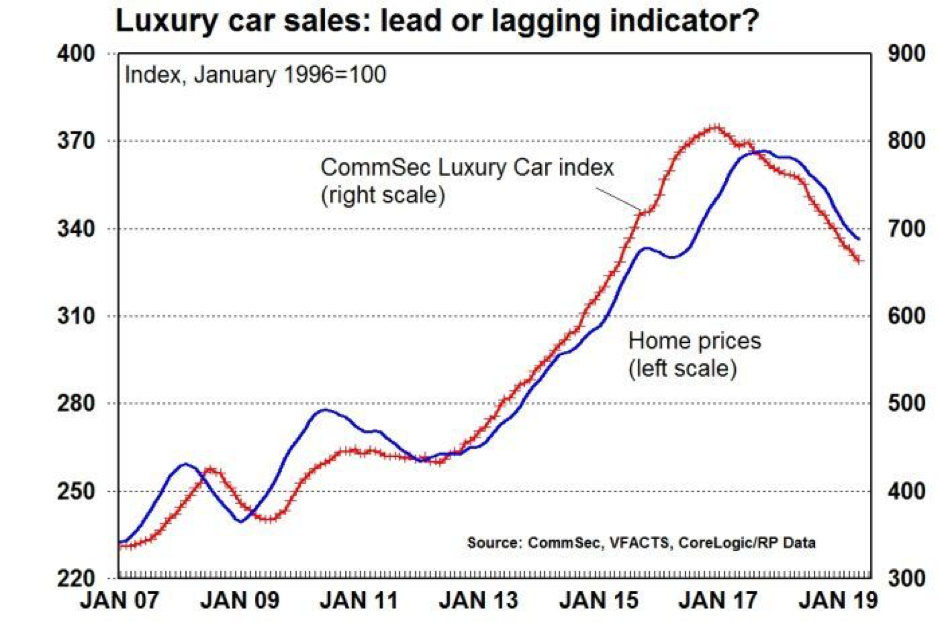 With this downturn in property prices and the subsequent impact on retailing, the relevant questions now are;

The answer to these questions will help determine if investment opportunities exist.

The initial tightening of credit conditions following the Financial Services Inquiry and the further tightening following the Royal Commission has had major consequences for both new and established residential property. For vendors of established properties, prices have weakened.  For developers of new properties, both apartments and house & land packages, prices have declined, and a cliff in building approvals has emerged with falls of roughly 40 per cent.

As we have previously reported, builders and developers have told us their pipeline is down 50 per cent by Christmas!  That could translate to a jump in the national unemployment rate because the construction industry is the third largest employer after healthcare and retailing.  The residential construction industry employs 3.5 per cent of the workforce in Australia, so a 50 per cent drop in activity could mean a big jump in unemployment.

As an aside, it is now obvious, all things being equal, that the RBA will need to cut rates aggressively.

At the very least a drop in income for tradies is likely. Tradies of course own properties and have mortgages.  They and their families also shop for homewares and for utes.

With the boom times over, tradies will be earning less income and will have to focus on the mortgage like everyone else. That means less shopping for decorations, electronics, Holden Colorados, Ford Rangers or Toyota Hiluxes.

Meanwhile, with fewer people buying those new and established properties, there are even less requiring furniture and all the accessories – think drapes, curtains, taps, electrical appliances, towels and bath mats – used to make those houses a home.

Businesses that retail homewares such as manchester, furniture and cars must be ground zero for the further slowdown that appears to be on its way.  Carsales data and the Adairs update may be the tip of the iceberg if the RBA’s cuts aren’t effective at stimulating animal spirits.

For equity funds like The Montgomery Fund, with the ability to hold cash, such an outcome is exciting;  the ability to buy businesses that are sound in the long-run, but which have fallen on temporary or cyclical hard times, is precisely what our process has positioned us for.