Home » Investor Insights » Latest Insights » A review of markets in 2021

2021 is almost in the books, and it’s once again time to have a quick review of how markets fared. While noticeably less “historic” than 2020’s record breaking year in terms of market volatility and extraordinary events, there were enough developments to keep market participants on their toes. (As an aside, it’s possible the 24 hour news cycle, rapid digestion of information and short-termism will mean volatility of returns will remain a feature going forward).

Just as it appeared society would see some semblance of normality in Australia (and the world), global markets were rocked by news of the new Omicron variant – which boasted over 30 mutations on its spike protein. This development, and the backdrop of stubborn inflation in the US and Western Economies, appears to have disturbed the recovery glidepath into 2022, with some significant repricing of risk over the past three months.

Narratives were again important in 2021, which included:

In terms of a quick re-cap of sector returns: 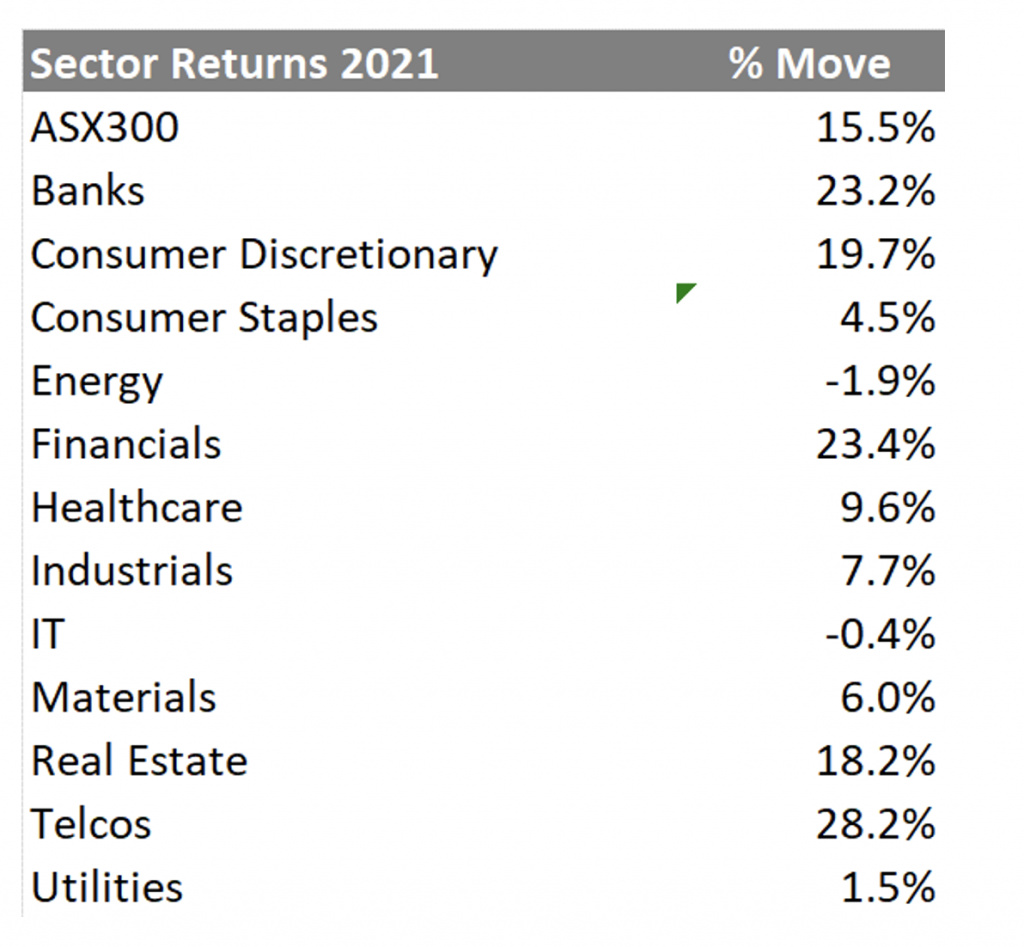 Somewhat surprisingly, the strong sector in 2021 to date has been the Telco sector. This is almost entirely due to the share price strength of industry leader Telstra – with a total return of over 40 per cent as investors became more comfortable with the execution of its T20 strategy, monetisation of its balance sheet (mobile towers) and improved price rationality in its key mobile markets.

A close second is the banks sector, as the initial optimism around economic recovery and write-back of provisions taken during the COVID-19 period was buoyed by a potential steepening of yield curves given inflation narratives. The mid-year strength in the banks sector however has been somewhat dented by the sell-off in 2 of the majors (mostly Westpac), as it took the biggest toll in margin compression as a result of mortgage competition.

The worst performing sector was once again Energy, posting a 2 per cent decline to date. This is also surprising given the rally we have seen in the underlying commodity – more than 40 per cent in Brent oil to date even with the recent Omicron led sell-off – over the year amid tighter supply (underinvestment) and economic recovery.

It’s fair to say there was always an element of price recovery factored into oil equities, however it’s possible the equities may be facing longer-term structural challenges in the face of increasing focus on de-carbonisation. This has been evident in coal equities to some degree, albeit the spike in thermal coal and gas prices due to energy shortages is a stark reminder that the world is dependant on fossil fuels for some years to come.

The oil majors in the Aussie market – Woodside, Santos and Oil Search – have also seen a significant shake up in their businesses – as the latter two merge Woodside combines with BHP’s petroleum division.

Finally, in another case of a one large constituent impacting sector returns, the IT sector has posted a broadly flat return in 2021. This is largely due to the all-scrip mega-merger announced between Square (now Block) and Afterpay (the biggest in Australian history), which has meant the Afterpay share price has been somewhat hostage to movements in the Block share price in the US. With the recent weakness seen in most Nasdaq members, this has seen the Afterpay share price fall in sympathy given the scrip nature of the deal.

Going into 2022 – while the concerns over Omicron’s impact have subsided quickly, financial markets may be facing a fairly significant change in monetary policy settings for the first time in a number of years as the US steps up its tapering and rate increase expectations.

This will undoubtedly impact expected returns for equities – but if yesterday was any indication, the news of faster tapering may already be priced in!