Home » Investor Insights » Latest Insights » A review of markets in 2020

With 2020 almost now behind us, I thought it was worthwhile looking at the year that was. It’s safe to say this year is unlikely to be forgotten for everyone, and not just those invested in equity markets. After a very strong January, investors and markets grappled with the uncertainty and severe volatility brought upon by COVID-19’s spread around the world.

Many historic records were set and broken, with March being particularly noteworthy for swings in sentiment including:

We also had a very strong rebound in April as central banks unleashed liquidity to prevent a financial meltdown, while governments looked to support households with unprecedented budget deficits.

Other notable developments in 2020 include:

Australian 10-year bond yields – having started off the year at approximately 1.4 per cent, leaves 2020 at around 1 per cent albeit after bottoming out at 61 basis points in the depths of the COVID-19 crisis. It remains to be seen whether 10-year bond yields stage a recovery as growth expectations improve following a year “on-pause” due to COVID-19.

Albeit the composition is vastly different, as the financials (mostly banks) trade at a significant discount to the broader industrials market, as does resources.

In terms of index constituents, here are some of the moves seen over 2020:

The top movers this year have largely been the miners, as well as some large-cap tech. After starting the year off as laggards (given the initial wide-spread impact of Coronavirus was in China), the large-cap miners have posted strong returns due to a much stronger iron ore price than expected as the Chinese government has reverted back to Fixed-Asset investment to restimulate the economy post the COVID induced slowdown, and some minor supply disruptions helps already bullish sentiment.

The top mover for 2020 is De Grey Mining, which entered the ASX300 in September following a meteoric share price rise driven by exploration success at its Hemi Gold project in Western Australia. Afterpay is next on the list, albeit its 271 per cent return does little justice to its share price journey over the year. 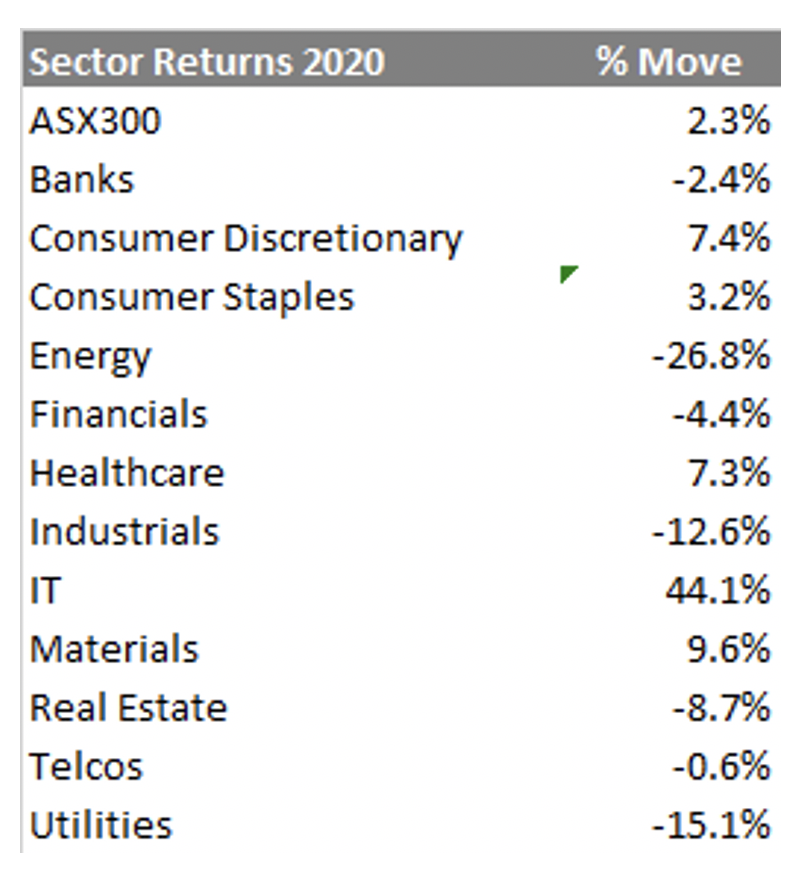 Like Healthcare and CSL in 2019, the outperformance of the IT sector was largely driven by the two heavyweights Afterpay and Xero.

GLOBAL
An ASX-quoted managed fund, typically, the Fund seeks to hold 15 to 30 long positions and partially offsets these with 10 to 40 short positions, operating with 130% exposure to its long portfolio and 30% exposure to its short portfolio, resulting in a net market exposure of around 100%. Features a target distribution yield of 5% per annum.
Learn More
Unlisted from $50,000